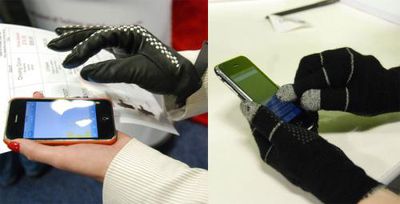 At Macworld, iTouch Gloves (left) and Telefingers (right) both offered solutions for using the iPhone's capacitive touch screen while wearing gloves. iTouch Gloves offer high end leather glove styles that start at $99.95.. They offer a variety of styles in both women's and men's styles.

Telefingers' solution is quite a bit less stylish but also much cheaper. For only $15 a pair, you can get a thinner (non-leather) pair gloves with specialized tips that allow you to control your iPhone screen. Either way, it's better than using sausages.

Electrorack offers a wide variety of server racking solutions, but this one caught our eye. It's a rack enclosure for Xserves and RAID configurations that happens to styled like an oversized Mac Pro.

TuneBug has been offering its SurfaceSound solution Vibe for some time already. Vibe is a small device that takes an audio source and turns any surface into a speaker. TuneBug has taken this same concept and applied it to both Bike and Snow/Skateboard helmets.

Shake connects via Bluetooth to your iPhone and then transmits sound waves throughout your helmet, letting you listen to your favorite tunes without headphones. Shake is expected to ship in April for $119.95.

U-Socket - USB Power in Your Wall

Fastmac claims this is the first of it kind due to some regulatory issues they had to clear. The U-Socket allows you to have a wall plate with both USB and regular power outlets. No more hunting for your USB->Power dongle, just plug your USB cable straight into the wall. U-Socket can be installed on any existing wall socket. The price is $19.95 now, but normally $29.95.
[ 96 comments ]


The USB do it yourself draws power constantly unless you hook up the outlet to a switch. With all the work it takes and the cost of the supplies it is not that much more expensive to buy the premade ones that do not constantly suck power.
Score: 1 Votes (Like | Disagree)
Read All Comments

Saturday February 4, 2023 10:05 am PST by Eric Slivka
Online retailer TigerDirect has slashed pricing on the M1 iPad Air in several colors, offering the base 64GB configuration for just $313.99 in Purple and Pink. Note: MacRumors is an affiliate partner with TigerDirect. When you click a link and make a purchase, we may receive a small payment, which helps us keep the site running. That's a savings of 48% compared to Apple's normal $599.00...
Read Full Article • 435 comments