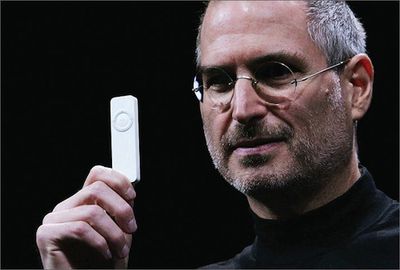 - Marketer of the Decade (Steve Jobs): Calling Jobs "visionary, iconoclastic and fearless", Adweek points to his role in saving Apple in the late '90s, followed by his remaking of the music and mobile phone industries as his defining achievements. His close collaboration with ad firm TBWA/Chiat/Day is seen as being instrumental in positioning Apple for success.

- Brand of the Decade (Apple): Apple's devotion to "relentlessly improving its products" and its "emotional connection to consumers" paved the way for its selection as Brand of the Decade, with its close ties to iconic CEO Steve Jobs serving to cement its marketing prowess.

- Product of the Decade (iPod): Likening it to the Sony Walkman of the 1980s, Adweek cites the iPod as "redefining" the MP3 player and the driving force of iTunes as being key to Apple's domination of the digital music industry.

- Campaign of the Decade (Apple, "Get a Mac"): The work of TBWA/Chiat/Day's Media Arts Lab, Adweek points to the ads' "neat trick of making the brand look laid back and cool while it mercilessly skewered its rival" as its key to success. The ads, which debuted in 2006 and now number more than 60, are also praised for personifying computers and demonstrating people's emotional connection to technology.

- Out-of-Home Ad of the Decade (Apple, "Silhouettes"): Also the work of the Media Arts Lab, Apple's "Silhouettes" ad campaign launched in 2003 and offered a unique and consistent message of "frenetic happiness" in promoting the iPod. The instantly-recognizable ads are also notable for achieving the "nearly impossible: defining a product without showing what it even looked like up close."

- Digital Campaign of the Decade (Nike Plus): A joint venture of Nike and Apple to link music and athletics, the Nike Plus campaign "defined how a brand can build a self-sustaining platform" simply using the Nike+iPod receiver. Seen as a community devoted to the "product experience", Nike has increased its share of the running shoe market from 48% in 2006 to 61% in 2008 while Nike Plus runners have logged over 100 million miles.