In a survey of customers who had purchased a computer within the past 90 days, 25% of respondents reported purchasing a Mac laptop, nearly matching previous highs set late last year and up from 18% in July. Abramsky notes that the sales spike has likely been driven by a combination of price cuts to Apple's notebook lines and back-to-school shopping. Apple's launch of Mac OS X Snow Leopard, generally-improving consumer electronics sales, increased brand awareness and iPhone-related spillover are also cited as factors in Apple's recent Mac rebound. 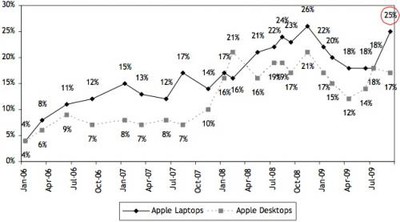 An RBC IQ/ChangeWave survey question about a hypothetical Apple tablet priced in the $500-$700 range also revealed significant interest, with 21% of buyers noting that they would be interested in purchasing such a device. That data compares to only 9% of buyers who had expressed interest in purchasing the iPhone in April 2007 ahead of its launch.
[ 43 comments ]