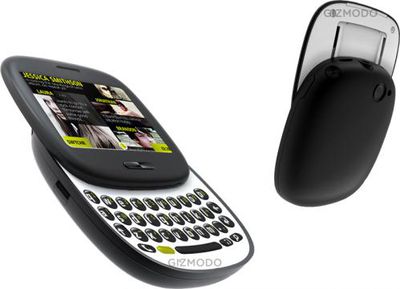 "Turtle"
Earlier this year, word surfaced that Microsoft was in the process of developing its own smartphone, codenamed "Pink", for launch in 2010. The phone, which was claimed to be manufactured by a third-party company, has been seen as a possible iPhone rival running on Microsoft's Windows Mobile platform.

Gizmodo today published images of not one, but two phones developed under the "Pink" project, known as "Turtle" and "Pure", and notes that Microsoft's manufacturing partner is to be Sharp.

These phones are going to be made by Sharp, who'll get to share branding with Microsoft. Sharp produced the Sidekick hardware for Danger, who was bought by Microsoft two years ago. Pink will be primarily aimed at the same market as the Sidekick, and the branding and identity for it is highly developed, pointing toward a later stage in the development cycle.

"Pure"
Gizmodo also points to a pair of reports from this past weekend claiming that the "Pink" phones will include Zune music and video services and an "App Store" similar to that employed by the Sidekick, placing the phones in direct competition with the iPhone's hardware-software feature set.
Related Forum: iPhone
[ 253 comments ]