A number of patent applications from Apple were released by the United States Patent and Trademark Office this morning, and two of them have received a fair bit of attention, having been first brought to light in a pair of reports (#1, #2) from AppleInsider.

The first application, entitled "Multi-dimensional scroll wheel", was filed in September 2008. It describes a scroll wheel, such as that used in the iPod classic and iPod nano, that is capable of sensing user input in multiple ways, as well as sensing multiple simultaneous inputs, essentially bringing multi-touch capabilities to the iconic iPod scroll wheel. 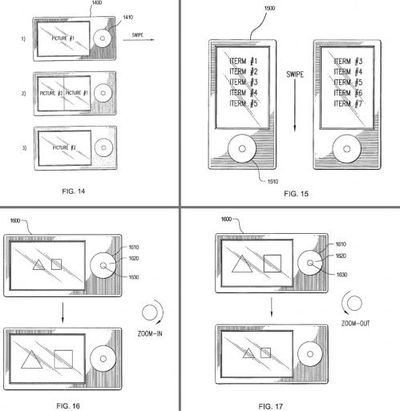 The second application, entitled "Methods and systems for mixing media with communications", was filed in November 2007 and describes methods for sharing digital media files such as music, videos, and images as part of an audio, video, or data communications connection without terminating the original connection.

Notably, while Apple's drawings accompanying the patent application point to implementations related to the iPhone, Apple also makes numerous references to the sharing of media while users are engaged in video conferences, something not possible in the current models of the iPhone. The addition of video calling, which would require a front-facing camera, to the iPhone has been a popular target of speculation, with rumors appearing as recently as this week pointing to the possibility of its appearance in an upcoming iPhone hardware update.

Monday January 24, 2022 7:12 am PST by Sami Fathi
Three months after their launch, the 14-inch and 16-inch MacBook Pros continue to experience high demand and seemingly short supply, with shipping dates for both models stretching into multiple weeks in several of Apple's key markets. In the United States, the baseline 14-inch MacBook Pro with the M1 Pro chip is estimated to ship in three to four weeks, promising an arrival by at least...
Read Full Article • 202 comments