Research firm Gartner today released a report covering mobile phone sales for the first quarter of 2009. As part of the report, Gartner released sales figures and market share for the smartphone category, which includes Apple's iPhone. According to Gartner's numbers, Apple more than doubled its share of the worldwide smartphone market to 10.8%, up from 5.3% in the year-ago quarter, maintaining its third position behind Nokia and Research in Motion. The increase came in the context of a smartphone marker that grew by 12.7%, while the overall mobile market shrank by 9.4%. 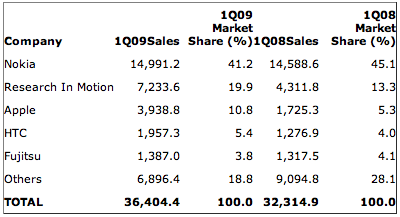 While Apple's smartphone market share saw a significant increase over the year-ago quarter, it was essentially flat compared to Apple's 10.7% share in the fourth quarter of 2008. The quarter-to-quarter results do, however, indicate that iPhone sales held up relatively well as the current model progressed into what should end up being the latter half of its life cycle.

Research in Motion, which offers the BlackBerry line of smartphones, also saw strong sales, seeing its share of the worldwide smartphone market reach 19.9%, a nearly 50% increase over the year-ago quarter and up slightly over its 19.5% share in the fourth quarter of 2008.