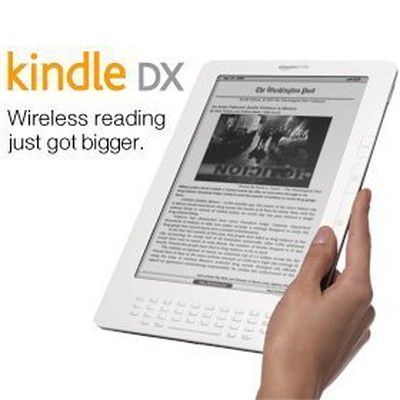 Engadget has just wrapped up live coverage of Amazon's press event introducing the Kindle DX, the next generation of Amazon's eBook reader. The Kindle DX, now available for pre-order at a price of $489 for shipment this summer, contains a 9.7" screen and is being positioned as a device for reading documents such as newspapers, textbooks, and research journal articles whose formats have not worked ideally with the smaller 6" screen of the current Kindle 2 model.

The Kindle DX features a built-in accelerometer that allows for auto-rotation of content between portrait and landscape orientations, and increased storage over the Kindle 2 of 3.3 GB, which provides space for up to 3,500 books periodicals, and documents. Like the Kindle 2, which will remain available at its current price of $359, the Kindle DX offers free 3G access through Sprint's network to allow downloading of content on the go. Native PDF support is also included.

The Boston Globe, The New York Times and The Washington Post are all planning to offer long-term subscriptions for Kindle newspaper editions at discounted prices.

Many people have viewed the Kindle as a competitor to the iPhone's eBook capabilities, with a Kindle for iPhone application also offering compatibility with Amazon's service on the iPhone. Rumors of an Apple "media pad" that could provide more direct competition to the Kindle on the eBook front have also been circulating in recent weeks.

Friday June 18, 2021 9:41 am PDT by Sami Fathi
After a long wait, YouTube for iOS is officially gaining picture-in-picture support, allowing all users, non-premium and premium subscribers, to close the YouTube app and continue watching their video in a small pop-up window. In a statement to MacRumors, YouTube says that picture-in-picture is currently rolling out to all premium subscribers on iOS and that a larger rollout to all US iOS...
Read Full Article • 183 comments

Friday June 18, 2021 6:59 am PDT by Sami Fathi
Apple supplier TSMC is preparing to produce 3nm chips in the second half of 2022, and in the coming months, the supplier will begin production of 4nm chips, according to a new report from DigiTimes. Apple had previously booked the initial capacity of TSMC's 4nm chip production for future Macs and more recently ordered TSMC to begin production of the A15 chip for the upcoming iPhone 13,...
Read Full Article • 154 comments