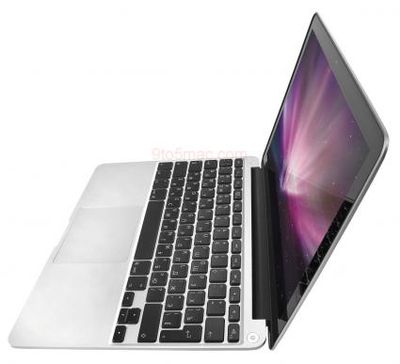 A series of images from a Russian magazine which claims to depict a "MacBook Mini" have been circulating on the internet. The specs on the described machine as said to include the following:

We don't know what to make of the images (scan #1, scan #2), and have our doubts about the legitimacy of the images. Still, with rumors have been circulating that Apple will be entering the netbook market, it makes for interesting speculation. The machine would reportedly retail for approximately $899 in 2009.

Update: One reader claims this is an April Fools joke by the magazine.

Monday August 8, 2022 10:43 am PDT by Juli Clover
With the fifth beta of iOS 16, Apple has updated the battery icon on iPhones with Face ID to display the specific battery percentage rather than just a visual representation of battery level. The new battery indicator is available on iPhone 12 and iPhone 13 models, with the exception of the 5.4-inch iPhone 12/13 mini. It is also available on the iPhone X and the iPhone XS. Battery percent...
Read Full Article • 331 comments