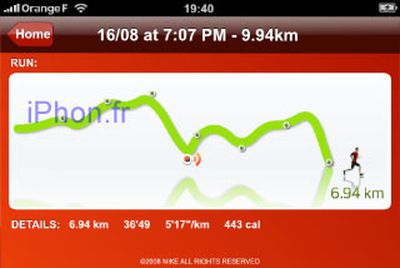 iPhon.fr posts (via Gizmodo) screenshots of what claim to be the upcoming Nike+ running application for iPhone. Nike+ is a running accessory for the iPod Nano that allows you to track your running.

With a sensor in your shoe and a receiver on your iPod nano, your run takes on a whole new dimension. See the minutes tick by. Watch the miles unfold. Hear real-time feedback. All to your favorite music including the one song that always gets you through the home stretch.

A new version for the iPhone and iPod touch had been previously reported but no announcements have been made since. The iPhone's always-on internet connection is expected to allow you to update your training log on the fly. The screenshots also reveal that mapping is included.

A few other running apps such as RunKeeper have been featured on our iPhone Blog (rss) which is tracking some of the latest iPhone app developments.

Nike+ has generated a significant following with a group of our forum members organizing MacRumors Nike+ challenges.
Update: AppleInsider believes these to be fake.
Related Forum: iPhone
[ 102 comments ]