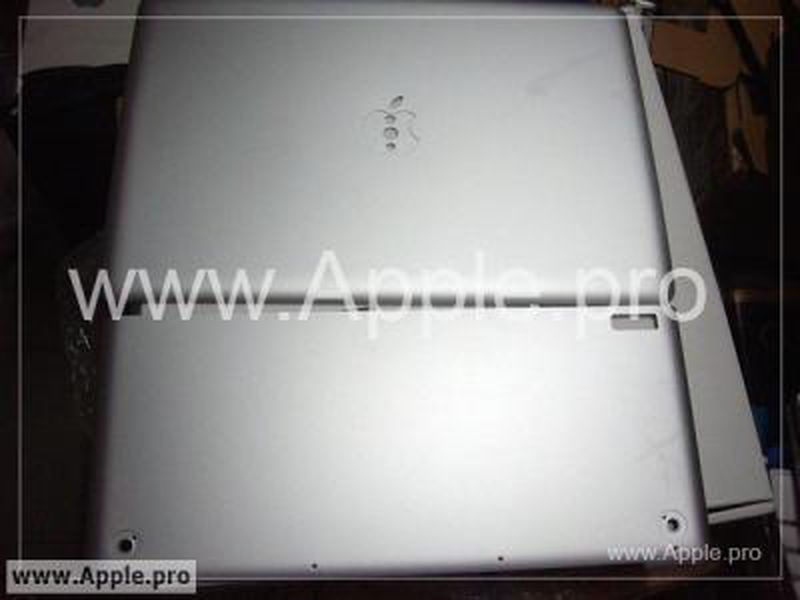 A blog entry (in Chinese) claims to have a photograph of prototype case housings of the upcoming redesigned MacBook Pro. The photo depicts what appear to be top and bottom housings of a Mac laptop sitting on a box. The housing resembles the current design of the MacBook Air but with a few notable differences. The logo in the prototype casing, for example, is no longer backlit. The screw configuration of the bottom case also does not match the current Air design, eliminating the possibility that this is just a photo of the Air's casing. There also appears to be no explanation for the additional circular indentations in the Apple logo, but could presumably be an artifact of being prototype casing. They do claim the battery would be more rectangular than square (not pictured) and the keyboard would be the same as the MacBook Air. The bottom case is smaller than the top case, but the additional space would likely be made up for by a removable battery.

Apple has been rumored to be working on new aluminum MacBook Pro designs that will adopt features of the current iMac and MacBook Air.

While the photo is consistent with rumors, we are always reluctant to believe that anonymously leaked photos are legitimate. More often then not, they turn out to be fake fan-created images, though there have been some legitimate leaks from Chinese sources.

Friday May 22, 2020 7:03 am PDT by Eric Slivka
We've been hearing quite a bit recently about Apple's long-rumored over-ear headphones, said to be called "AirPods Studio," and it looks like a launch may be coming in the relatively near future. Artist mockup based on Beats Studio3 Rumors have generally suggested a summer or fall launch for AirPods Studio, with a report earlier this week claiming that suppliers in Vietnam will begin...
Read Full Article • 80 comments

Monday May 25, 2020 2:53 am PDT by Tim Hardwick
Apple is reportedly looking to integrate light sensors in a new model of AirPods in the next couple of years, according to a new report today, suggesting their use could be part of rumored upcoming health monitoring features in the true wireless earbuds. In a paywalled article, DigiTimes reports that ASE Technology could be involved in manufacturing the sensors: Apple is expected to...
Read Full Article • 21 comments