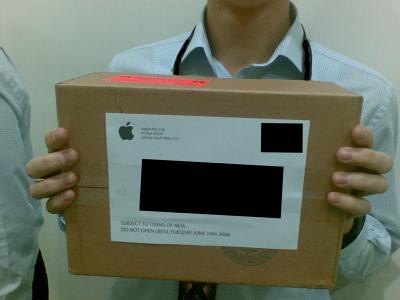 Photo not intended to represent the London box described in article.
More sealed boxes are reportedly arriving at Apple Stores worldwide with Arstechnica reporting that the London Regent Street Apple Store has received "a single box that is padlocked, and under orders to be put in a safe until Monday."

The image of the above box was sent in anonymously and correlates to the box that supposedly was sent to some Australian resellers. Web-mobile.net claims to have photos of the open box, but the authenticity remains up for debate. These images are provided for interest only and are not necessarily felt to represent authentic images.

We've also heard that Germany's T-Mobile has already received subsidized rate plans for the iPhone coming in at a subsidized 99, 199 and 299 euros. These are prices for hardware with a 2 year contract, but may only represent two distinct models, as the amount of subsidy depends on what rate plan is chosen. For comparison, T-Mobile Germany currently offers 4 prices (99, 149, 199, 249 euros) for the 8GB iPhone alone depending on the rate plan chosen. Meanwhile, the current 16GB iPhone (499 euro) has not been eligible for any discounts regardless of rate plan.

Finally, news is coming out of Spain that the new iPhone will be sold there starting at 99 euros by Corriere.it.

Apple will be announcing their new products at the WWDC 2008 keynote speech on Monday, June 9th at 10am Pacific. We will have live web/photo coverage at MacRumorsLive as well as Twitter, SMS and Spoiler free coverage.

Saturday June 12, 2021 3:17 pm PDT by Joe Rossignol
Apple this week previewed iOS 15, which is available now in beta for developers ahead of a public release later this year. One smaller but useful new feature added is the ability to drag and drop images, text, files, and more across apps on iPhone. MacStories editor-in-chief Federico Viticci demonstrated the new feature in a tweet: Using cross-app drag and drop on iPhone in iOS 15. Finally 🎉 #WW ...
Read Full Article • 97 comments

Friday June 11, 2021 10:27 am PDT by Joe Rossignol
We've highlighted several new features coming in macOS Monterey, such as Low Power Mode and the option to erase a Mac without reinstalling the operating system, but there are some smaller tidbits that we wanted to share. Animated Memoji on Login Screen One small but fun new feature in macOS Monterey is the addition of a personalized Memoji on the login screen, complete with animated facial...
Read Full Article • 85 comments

Saturday June 12, 2021 7:01 am PDT by Sami Fathi
In a currently unlisted ad on YouTube, Apple is promoting the versatility, portability, and power of the M1 iPad Pro in a fun musical inspired by The Little Mermaid's "Part of Your World" soundtrack. In the ad, which features the main character using an M1 iPad Pro, Magic Keyboard, and Apple Pencil, multiple users can be seen struggling with their old PCs indoors while hoping that they can...
Read Full Article • 345 comments