Apple is expected to launch its Back to School promotion tomorrow, and on the eve of its launch, we've learned that Apple is indeed going to be making it their biggest ever.

According to our sources, Apple will be offering a free 8GB iPod Touch ($299) to college students who buy a qualifying Mac (MacBook, MacBook Pro, MacBook Air, iMac, Mac Pro). Alternatively, students may choose to get an 8GB iPod Nano ($199). The promotion will run from June 3 to September 15th, 2008.

With this aggressive promotion as well as the rumored 3G-capable iPhone launch, Apple is rapidly expanding their Touch OS X platform over the next few months, giving developers a large audience for their iTunes Store apps and games.

Details of the Back to School promotion, including eligibility should be officially announced tomorrow.

Update: Appleinsider confirms the promo. The $299 value can be applied to a higher capacity iPod player, but not the iPhone.

Update 2: The iTunes store now has a banner promoting the Back to School promotion and shows an iPod Touch as the free iPod. The ad's link is not yet live: 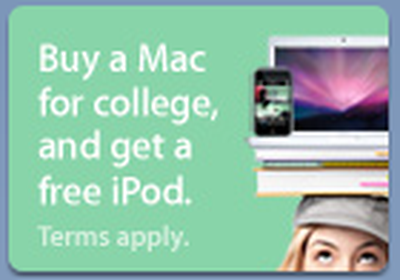