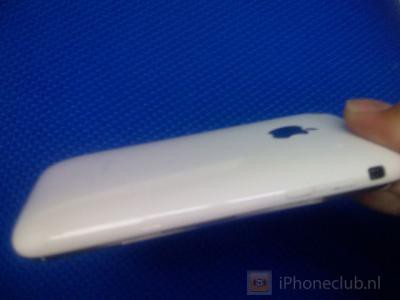 Another set of supposedly "leaked" next generation iPhone photos have been posted to iPhoneClub.nl (via Engadget). The images depict a white iPhone with a curved back consistent with circulating rumors.

According to the source - who wishes to remain anonymous - these pics originate from a well known European accessory maker.

These "leaked" photos are rarely accurate, and are typically fake images created by fans. That being said, the images are consistent with circulating rumors describing what the next iPhone may look like. iLounge was the origin of these design rumors with a report claiming to have design specs from 3rd party case manufacturers who had knowledge of the dimensions of the upcoming iPhone.

We post these images for interest only as it has already generated a lengthy discussion in our forums, and we don't necessarily believe these to be real. If the original rumors are to be believed, the iPhone is said to be coming in 3 colors: black, white and red.

Tuesday May 11, 2021 11:56 am PDT by Joe Rossignol
Last month, Apple introduced a new iPad Pro with the same M1 chip found in the latest Macs, and early benchmark results indicate that the M1 iPad Pro is over 50% faster than the previous-generation iPad Pro. Based on five legitimate Geekbench 5 results (here's the fifth) for the fifth-generation 12.9-inch iPad Pro with the M1 chip, the device has average single-core and multi-core scores of...
Read Full Article • 326 comments