When Apple announced that the iPhone would incorporate Exchange support through ActiveSync, they specifically pointed out some shortcomings of RIM's server-based system. In the following Question and Answer session, Jobs even pointed to potential security issues with RIM's model:

"Every e-mail message sent to or from a RIM device, goes through a NOC up in Canada. Now, that provides a single point of failure, but it also provides a very interesting security situation. Where someone working up at that NOC could potentially be having a look at your e-mail. Nobody seems to be focused on that. We certainly are."

These concerns, however, may have been overstated. American Technology Research issued a report (via Appleinsider) comparing the two approaches to providing Exchange support for the Apple's iPhone vs the RIM's BlackBerry. 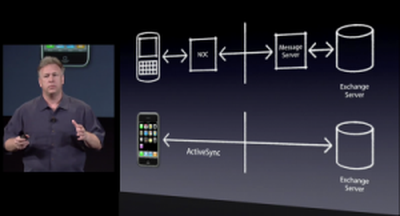 RIM's setup for Exchange support requires the use of BlackBerry Enterprise Server which connects to RIM's network operations center (NOC) in Canada. Even though messages travel through a number of servers, the contents are encrypted at the origin before being passed through RIM's NOC and finally to the BlackBerry device which alone can decrypt it. According to the research company, this gives BlackBerry the "highest level of security in the industry".

In contrast, the iPhone will interface directly with the Exchange server. The analysts, however, go on to speculate that Apple's ActiveSync implementation could have its own issues with security, and have an impact on battery life and scalability. Regardless, they feel that the iPhone's unique advantages could provide a better ActiveSync experience over existing implementations.

Apple is set to release their new enterprise features for the iPhone in June 2008.