Financial software maker Intuit has been busy over the past year. Two of its major software titles for the Mac, Quicken and TurboTax, have seen or are in the process of being re-written from the ground up to make better use of modern technologies. 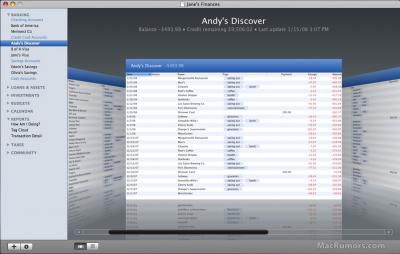 Quicken Financial Life for Mac
Quicken for Mac has long existed as a Carbon application due to its pre-existence on Mac OS 9. However, in recent years the Quicken for Mac designers have increasingly felt that they were not bringing the product to its fullest potential. With a Carbon code base, and varying 3rd party libraries, a universal binary version of the application became impossible without a ground-up re-write.

Therefore, Quicken 2007 for Mac will be the last in the current line of Quicken for Mac products and a brand new Quicken for Mac product, currently called "Quicken Financial Life for Mac" is being written. This product will use a slew of Mac OS X technologies. Here's a quick preliminary technical specification rundown:

Because the application is being built from the ground-up, it will initially contain only a subset of what is currently found in Quicken 2007 for Mac. While it will fully support cash-flow accounts (cash, checking, savings, credit cards), it will start with extremely limited support for investments, though you will be able to track your balances and holdings and calculate your net worth. However, TurboTax and DirectConnect/WebConnect support are all to be expected in the 1.0 product.

Pricing hasn't been ironed out yet, but the final version is expected to ship in fall of 2008. Quicken was good enough to supply us with these exclusive high-quality screenshots of the application, but note that the application is still in pre-alpha, so the screens are subject to change.

TurboTax 2008 For Mac
TurboTax has also seen a ground-up rebuild this year. While the changes may not be quite as drastic as Quicken, Intuit says that several highly requested Mac-specific features have been added to this year's product.Features shared by the Windows product include life change questions that are placed earlier in the preparation process, a help system tied into Intuit's user community, an improved audit risk meter, and a free audit support tool in the unlikely event you are audited.

Mac-only features include:
- A form view that is always accessible and flips into view. Users who are used to filling out paper forms can switch between the interview and the form at any time.
- Save returns to iDisk
- Archive return and TurboTax 2008 to CD
- Create multiple returns (good for figuring out if you want to file jointly or separately)

One More Thing...
Unfortunately, while Intuit has made its strides this year, it has also had its setbacks. In the wake of a very public data loss issue involving QuickBooks 2006, I asked Intuit for an update on the incident and the product.

Intuit was frank that they definitely had encountered a nightmare scenario, and that they took the incident very seriously. Unfortunately, the solution for 2006 users was to turn off automatic updates; however, a fix has been put in place for the 2007 product to ensure that such a scenario does not occur in the future.

As for QuickBooks: users can expect an update this fall with new and improved features, but no it isn't a rewrite.