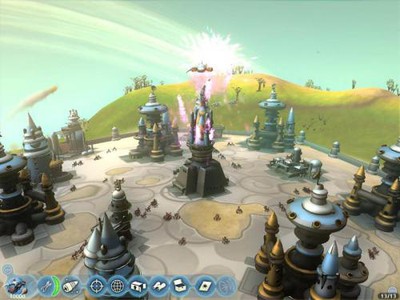 EA announced at Macworld that they would be releasing Spore later this year simultaneously for PC and Mac.

Spore is your own personal universe in a box. In this universe you can create and evolve life, establish tribes, build civilizations and even sculpt entire worlds. In Spore you have a variety of creation tools at your disposal that allow you to customize nearly aspect of your universe: creatures, vehicles, buildings, and even spaceships. While Spore is a single player game, your creations and other players' creations are automatically shared between your galaxy and theirs, providing a limitless number of worlds to explore and play.

Spore will use TransGaming's technology to allow EA to quickly make a Mac version of the game:

"The technology wrapper goes around (the software), and traps the (code) calls native to the Windows environment, and converts them to the correct calls for Mac," McCombe said. "It's not a complete code rewrite. It's more wrapper technology with some customer work."

The official site has more information, screenshots and movies.

Saturday April 17, 2021 4:43 am PDT by Sami Fathi
Reliable leaker known as l0vetodream has hinted that Apple may debut its rumored redesigned and colorful iMac at its "Spring Loaded" event on Tuesday, April 20. In a tweet, the leaker posted an image of Apple's logo used for marketing the upcoming event and an image of the retro rainbow Apple logo alongside the colorful lineup of G3 iMacs. Apple leaker Jon Prosser previously reported that...
Read Full Article • 276 comments

Monday April 19, 2021 6:37 am PDT by Hartley Charlton
Apple is planning to launch a new entry-level iPad, iPad mini, and iPad Pro at its "Spring Loaded" event tomorrow, along with "a few surprises," according to Wedbush analysts. In a new note to investors, seen by MacRumors, Wedbush analysts Daniel Ives and Strecker Backe explained that the iPad will be the main focus of Apple's "Spring Loaded" event, with new entry-level iPad, iPad mini, and ...
Read Full Article • 180 comments

Monday April 19, 2021 11:30 am PDT by Juli Clover
The upcoming 12.9-inch iPad Pro will be thicker than the previous-generation version, likely due to the inclusion of the mini-LED display. We've heard several rumors about the change in thickness, and now leaked design images have confirmed it. A source that designs accessories for Apple devices sent MacRumors a series of photos that feature exact dimensions for the new iPad Pro models, and...
Read Full Article • 206 comments