ExoLens and Zeiss have teamed up to create some high-quality lenses designed to take iPhone photography to the next level. At $200, the ExoLens PRO with Optics by Zeiss Wide-Angle Kit for the iPhone 7 and iPhone 7 Plus is almost the price you'd pay for a standalone camera, but the lens is distortion free, compact, and enhances the range of images you can capture with your iPhone. 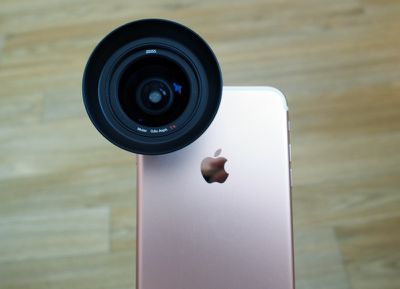 There are dozens of inexpensive lenses on the market, but most of the cheaper options are unable to measure up to the quality you get with the $199 Zeiss/ExoLens combo.

The ExoLens PRO comes in a padded box and ships alongside several mounts to fit different sized iPhones, including the iPhone 7, iPhone 6s, and iPhone 6s Plus.

Right out of the package, the ExoLens PRO stands apart from other lens options. It's over an inch tall and similar in circumference to a standard pill bottle, with a solid weight to it. The outside of the lens is made from aluminum, and the glass of the lens itself is protected with caps on each side when not in use. Zeiss branding is on the side of the lens, which looks more like a small DSLR lens than a standard iPhone lens.

Inside the box, there are two carrying bags for the lens and any accessories, along with an aluminum lens hood and an installation guide.

While the lens feels secure, it adds a lot of weight to the iPhone and changes the balance of the device. It's unwieldy to hold and I needed to use two hands when taking a photo. Even then, I was worried it would slip out of my hands.

The ExoLens PRO can't be used with a skin or a case on the iPhone, so there's no real way to add extra grip. The extra weight and bulk of the lens also makes it more difficult to carry -- it's not going to fit in a pocket, and it's awkward to use for other purposes with the lens attached.

It's not difficult to pull the lens off when it's not in use, but it's worth noting that this is a lens that you're only going to want to have on the camera for the express purpose of picture taking. There's a lot more on and off action needed than with smaller lenses like the Olloclip.

The ExoLens PRO lens mount covers up the telephoto lens, so the lens itself only works with the standard iPhone lens. Since this is a wide-angle lens, that's not a surprise, but it does prevent 2x zoom and Portrait mode from being used while the lens is attached. It does not work with the front-facing camera and it also prevents the flash and the microphone from working properly when attached.

The lens is a Zeiss Mutar 0.6x Asph T* wide-angle lens, which is an 18mm equivalent. That's wider than the default iPhone camera, which Apple says is 28mm.

With ExoLens on right, without ExoLens on left
At 18mm, the Zeiss wide-angle lens is ideal for capturing landscape shots or more of an indoor area, and there's an anti-reflective coating on the lens that seems to improve image quality when it's bright outside.

ExoLens example shot
Pictures captured with the lens are as sharp and clear as those taken without the lens, and there is no distortion at the edges, a common issue with wide-angle camera lenses designed for the iPhone. I also saw no artifacts or color aberrations.

This is something of a niche product, and to be honest, I'm not sure who it's targeted at. The average iPhone user isn't going to want to shell out $200 for a wider-angle iPhone lens, nor should they, and photographers who need a wide-angle lens likely have better camera equipment.

It's a well-built lens that produces high-quality images, but it isn't a whole lot wider than what you get with the built-in camera (18mm vs 28mm) and it's bulky and heavy, so it's not a great solution for most iPhone users.

That said, it takes excellent photos, so if you're a person with $200 to spare and you take all of your photos on the iPhone and want to extend your range, this is a lens worth considering.

The ExoLens PRO Wide-Angle Kit with a Zeiss Lens can be purchased from the ExoLens website for $199.95.

Note: ExoLens provided MacRumors with a ExoLens PRO with Optics by Zeiss Wide-Angle Kit for the purpose of this review. No other compensation was received.

Will they be selling mounting kits for future iPhones so you can keep using these expensive lenses into the future?
Score: 10 Votes (Like | Disagree)

I know these take really high end photos and the results are that of DSLR. But That looks a little ridiculous attached to the iPhone.

No, not the results of a DSLR. A DSLR has a much much much larger sensor and way better optics. This little lens looks cool, but all the light is still getting funnelled through a tiny iPhone lens and a really tiny sensor. It's all OK in the daytime, but at night you really start to see the difference.

I'm not knocking smartphone photography -- it's absolutely amazing, but there's only so much you can do with that compact of a camera.
Score: 5 Votes (Like | Disagree)

Fzang
Can't get rid of the noise though, which is the biggest problem with smartphone photography.
Score: 3 Votes (Like | Disagree)

simonmet
It's misleading to say this is lens is distortion free. Not even the best lenses in the world claim that, especially wide-angle lenses. Lens distortion is not a check-box you tick either yes or no. There are different types and it varies from the centre point of an image. You simply cannot represent a spherical surface on a flat plane without some kind of compromise.

What the article probably means to say is that it has rectilinear correction (straight lines appear straight) and relatively low spherical distortion compared with other iPhone add-on lenses of its width. In other words, it's a premium version of this type of product. Even well rectilinear-corrected lenses still get volumetric distortion and perspective effects.

Saying "distortion-free" is market bollocks. It's misleading and incorrect and the author should clarify this for the benefit of readers who may not understand.
Score: 3 Votes (Like | Disagree)

I know these take really high end photos and the results are that of DSLR. But That looks a little ridiculous attached to the iPhone.

Well, no, since there are innate physical limitations related to having a very small sensor.

Today's phones do take awesome photos, given what they are. But if one feels the need to add that kind of bulk to improve the quality of one's photos, a DLSR or mirrorless makes more sense.
Score: 2 Votes (Like | Disagree)

Cheap and mirrorless don't go in the same sentence anymore. Prices for SLRs have been going back up.

Yeah maybe if you get something like the new pro sports 20fps A9 that costs $4499 but the A6000 has one of the best price/performance ratios out there and can often be found on sale around $399 body only. Personally I'm waiting for the A7III which will likely be in the $1799-1999 range and wreck the 5DMkIV. I'm switching from Canon for my personal work but will still be using a 5DMkIII at work.
Score: 2 Votes (Like | Disagree)
Read All Comments

Saturday May 21, 2022 9:00 am PDT by Hartley Charlton
With around four months to go before Apple is expected to unveil the iPhone 14 lineup, the overwhelming majority of rumors related to the new devices so far have focused on the iPhone 14 Pro, rather than the standard iPhone 14 – leading to questions about how different the iPhone 14 will actually be from its predecessor, the iPhone 13. The iPhone 14 Pro and iPhone 14 Pro Max are expected...
Read Full Article • 319 comments