Like the iPad Air 4, Apple's fifth-generation ‌iPad Air‌ (2022) features an edge-to-edge display with no Home button included and Touch ID built into the Power button instead. The lack of a Home button means some gestures and features are different to older iPads, such as the restart, shut down, and force restart methods. 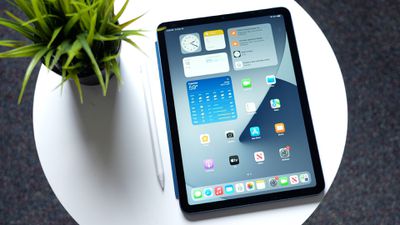 On ‌iPad Air‌, a shut down and a restart are the same gesture, while a force restart, used if a regular restart won't work, is a bit different compared to iPads with a Home button.

To Shut Down/Restart Your iPad Air 4 or 5

On iPads with a Home button, you can restart by holding down the Home button and the Side button on the device at the same time, but on the ‌iPad Air‌, you need to do a full shutdown and then power the tablet back up in a separate step.

You can also turn off your ‌iPad Air‌ by opening up the Settings app, choosing General, and selecting Shut Down.

To Force Restart Your iPad Air 4 or 5

Friday July 2, 2021 3:22 am PDT by Tim Hardwick
If you've installed iOS 15 or iPadOS 15 through Apple's developer program or the public beta now it's been released, you may decide you want to downgrade because of usability or stability issues. Keep reading to learn how it's done. Apple usually only releases the public betas of ‌iOS and ‌iPadOS‌ once the developer versions are relatively stable. That said, Apple's beta versions of...
Read Full Article • 42 comments

Thursday February 3, 2022 2:09 pm PST by Tim Hardwick
In iPadOS 15, Apple introduced a new productivity feature called Quick Notes that provides a quicker way to jot down things on your iPad without you having to go in and out of the Notes app. Whether you're on the Home Screen or within any app, you can bring up a floating Quick Note window at any time using your finger or an Apple Pencil, by swiping diagonally up from the bottom-right corner...
Read Full Article