How to Set a Timer on HomePod

HomePod has built-in Siri functionality, which means it can be used to do a lot of the same things that can be done with an iPhone or an iPod, like setting an alarm or a timer.

If your HomePod is in the kitchen, setting a timer while cooking can be useful, and it's as simple as using a single Siri command.

All you need to say is "Hey Siri, set a timer for [x amount of time]." 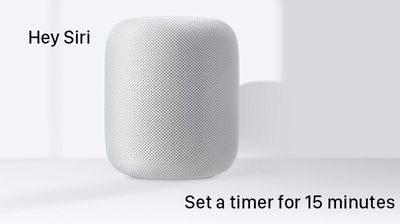 You can set a timer for a select number of minutes or hours, with a maximum timer limit of 24 hours. If you ask Siri to set a timer for longer than 24 hours, Siri will suggest you use a Reminder instead.

When the time is up, the HomePod will play a sound. To stop the timer sound, you can either tap the top of the HomePod or ask Siri to stop it.

Turning Off the Timer

At any point while the timer is running, you can ask Siri to turn it off with a command like "Hey Siri, turn off the timer" or "Hey Siri, pause the timer."

Unfortunately, you can only set one timer at a time. If you attempt to set a second timer while the first timer you set is still running, Siri will say "A timer is already running at [x minutes]. Would you like to replace it?"

There's also no way to view or manage your HomePod timers on an iOS device like there is with alarms -- timers on HomePod all handled via voice with Siri.

IcyTexx
Please stop churning out idiotic articles like these, just for the sake of it.
Score: 13 Votes (Like | Disagree)

iChrila
How about a YouTube Video on how to plug your HomePod power cable into the wall outlet? I got stuck there and can't even get Siri to work /s
Score: 6 Votes (Like | Disagree)

I realize this how to is a little simpler than some that we've done, but there are less tech savvy people out there who read our forums and our articles and find them helpful.

Sometimes our how tos are also about highlighting available features on a product more so than the actual simple steps to use said feature, and this is one of those times. I think there are plenty of people out there with a new HomePod who may not often use Siri and may not even know that a feature to create a timer exists.
Score: 3 Votes (Like | Disagree)

I realize this how to is a little simpler than some that we've done, but there are less tech savvy people out there who read our forums and our articles and find them helpful.

Sometimes our how tos are also about highlighting available features on a product more so than the actual simple steps to use said feature, and this is one of those times. I think there are plenty of people out there with a new HomePod who may not often use Siri and may not even know that a feature to create a timer exists.

I appreciate these articles, it allows a comparison to the other home assistance devices. In my case, it highlights the limitations of HomePod when compared to the Echo.

It's also a reminder that Apple has done very little in the way of actually looking at how people use these devices. The Echo, for example, allows multiple timers - which is especially helpful in the kitchen when trying to time numerous things.

One more reason that I'll not be buying a HomePod for a while yet.
Score: 3 Votes (Like | Disagree)

benroberts3
Inexcusable you can’t set more than one timer. And this is coming from someone who loves apple.
Score: 3 Votes (Like | Disagree)
Read All Comments