iOS 14: How to Change Video Quality in the Camera App

In Apple's stock Camera app in iOS 14, iPhone and iPad users can change video resolution and frame rate on the fly, without having to go into the Settings app, which was previously the case on some ‌iPhone‌ and ‌iPad‌ models.

Next time you shoot video using the Video mode found in the menu strip below the viewfinder, notice the video resolution and frame rate separated by a dot in the top-corner of the screen. 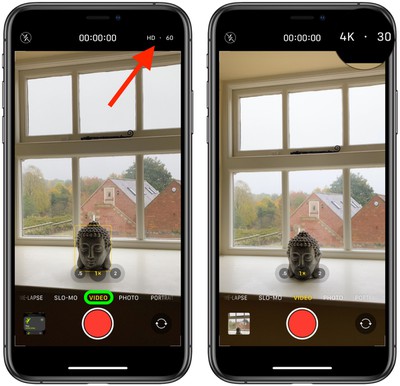 If video quality is set to 1080p in Settings -> Camera, you can tap the resolution in the Camera interface to flip between HD (1080p) and 4K. If it's set to 720p in Settings, tapping the format flips between 720p and 4K.

The ability to change video mode like this was previously only available on the ‌iPhone 11‌ and 11 Pro, but with ‌‌iOS 14‌‌ Apple has expanded it to all iPhones.

Friday January 15, 2021 1:46 pm PST by Juli Clover
Apple has started "early work" on an iPhone that has a foldable display, according to a new report from Bloomberg's Mark Gurman. Though testing of a foldable iPhone has begun, Apple has not committed to releasing a device that has a foldable display. Development has not yet expanded beyond a display and Apple does not have full foldable iPhone prototypes in its labs. Like foldable...
Read Full Article • 215 comments

Thursday January 14, 2021 9:32 pm PST by Juli Clover
Apple is working on two new MacBook Pro models that will feature significant design changes, well-respected Apple analyst Ming-Chi Kuo said today in a note to investors that was obtained by MacRumors. According to Kuo, Apple is developing two models in 14 and 16-inch size options. The new MacBook Pro machines will feature a flat-edged design, which Kuo describes as "similar to the iPhone 12" ...
Read Full Article • 522 comments

Friday January 15, 2021 10:23 am PST by Juli Clover
Apple is developing two versions of the Mac Pro to succeed the Mac Pro that was first released in December 2019, according to a new report from Bloomberg. The first updated Mac Pro is a direct successor to the current Mac Pro and it will use the same design. It may also be equipped with Intel processors rather than Apple silicon chips, and it could be one of the sole machines in the Mac...
Read Full Article • 249 comments

Friday January 15, 2021 12:16 pm PST by Juli Clover
Surprise late night rumors last night provided us with our first in-depth look at what we can expect from the new MacBook Pro models that are coming in 2021, and there are some significant changes in the works. Along with additional ports, a new flat-edged design, and the removal of the Touch Bar, Apple's updated MacBook Pro machines will readopt MagSafe. MagSafe in the 2021 MacBook Pro...
Read Full Article • 188 comments