In iOS 15, you can put multiple copies of the same app on your iPhone's Home Screen. On the surface, this may seem like a strange thing to allow, and perhaps even a bug, but Apple has intentionally made it possible to have additional copies of an app across several ‌Home Screen‌ pages so that the apps can be used in conjunction with its new Focus features. 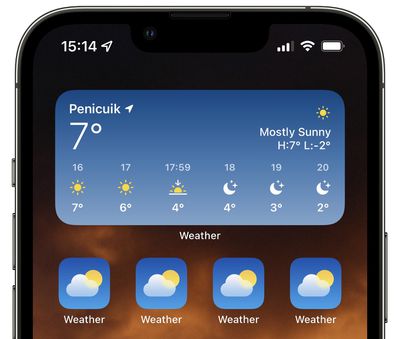 One of the functions of Focus is that you can disable ‌Home Screen‌ pages based on which Focus mode they're assigned to. For instance, you can set up a Focus mode for work and a different one for leisure time, and have any work apps hidden in the latter mode. In this example, you may want certain apps to appear on both ‌Home Screen‌ pages you've set up, which is why it's possible to have multiple copies of the same app.

Don't worry – having several copies of apps on your ‌iPhone‌ doesn't use any additional storage, since every icon refers to the one app. The following steps show you how it's done.

To create multiple copies of the same app, simply repeat these steps as many times as you like.

Tip: If you're having a hard time finding the app you want in the App Library, tap the search bar at the top or swipe down to see all the apps on your ‌iPhone‌ listed alphabetically. When you find the app you want, long-press its name rather than its icon, then drag it left towards the ‌Home Screen‌.

If you later decide you don't want multiple copies of the same app, simply long press its icon on the ‌Home Screen‌, then tap Remove App, and confirm by tapping Remove from ‌Home Screen‌. Bear in mind that if you select the Delete App option on this menu, it will uninstall the app from your ‌iPhone‌ and any other icon copies of it on your ‌Home Screen‌ will vanish.

iOS 15: How to Rearrange and Delete Home Screen Pages

Friday June 18, 2021 3:51 pm PDT by Tim Hardwick
In iOS 14, Apple lets you disable individual Home Screen pages thanks to the App Library, which is available to keep your apps better organized. However, not everyone gets on with the App Library, and it's not possible to rearrange the order of your ‌Home Screen‌ pages, nor can you delete a page outright rather than merely disabling it. In ‌iOS 15‌, though, you ‌can do both. Here's how...
Read Full Article • 41 comments

How to Make Your Mac's Cursor Bigger

Wednesday March 2, 2022 8:12 pm PST by Tim Hardwick
In macOS, Apple allows you to easily increase the size of the mouse or trackpad cursor on the screen, which is great if you find it difficult to keep track of. Keep reading to learn how. If you're having a hard time working out when the cursor on your Mac's screen moves or changes to an insertion point, crosshair, hand, or other shape, it's worth making it bigger. Making the on-screen...
Read Full Article