All the Apps That Support Apple's Spatial Audio Feature

Spatial audio is a sonic feature exclusive to AirPods Pro and AirPods Max that adds surround sound to Apple's premium audio wearables. By utilizing dynamic head tracking, it brings a theater-like audio experience to the movie or video you're watching, so that it seems as if the sound is coming from all around you. 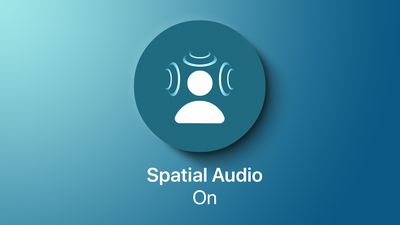 Unsurprisingly, spatial audio isn't universally supported by third-party apps and services. To save you spending time wondering if a particular app works with the feature, we've put together a list below of all the apps that have officially been updated to support Spatial Audio, and some popular apps that have yet to add support.

We'll keep these lists updated as and when we learn of additional third-party apps and updates that come out in support of spatial audio. In the meantime, check the following details to make sure that your hardware is compatible with the feature.

What You Need to Use Spatial Audio

To take advantage of spatial audio on ‌‌AirPods Pro‌‌ or ‌‌AirPods Max‌‌, you need an ‌iPhone‌ 7 or later or one of the ‌iPad‌ models listed below. Note that spatial audio is not supported by any Mac model or any Apple TV models.

You also need iOS 14 or iPadOS 14 or later installed on your device, as well as the latest firmware on your ‌‌AirPods Pro‌‌ or ‌‌AirPods Max‌‌. To learn more about using spatial audio, check out our dedicated how-to article.

jclo
Let us know if we're missing any apps that have spatial audio support and we'll add them to the list.
Score: 6 Votes (Like | Disagree)

Shame the MacBook pro does not support this.

The reason the Macs and Apple TV don't support this is Apple doesn't just positionally track the AirPod Max or Pro, but it tracks the video device as well. The necessary hardware is not in the Mac or Apple TV (yet).
Score: 5 Votes (Like | Disagree)

yegon
My uncle who works at Google told me YouTube will support Spatial Audio when Apple releases their car and it’s accompanying 12 foot by 12 foot AirPower charging mat.
Score: 4 Votes (Like | Disagree)

neoelectronaut
I still don't understand this tech. Why wouldn't you want this to work like normal surround sound instead of virtual directional audio so it sounds like it's coming from your iPhone instead?
Score: 3 Votes (Like | Disagree)

I still don't understand this tech. Why wouldn't you want this to work like normal surround sound instead of virtual directional audio so it sounds like it's coming from your iPhone instead?

You can watch movies and distinguish sounds from the left, right, front and back and only need 2 sound sources.
The method uses multi-channel audio (e.g. 5.1 AC3 or 7.1/Atmos E-AC3) and Apple recalculates it.
It realistically only works with headphones though (and only in theory with 2 speakers).
Due to the gyro head movement detection of the AirPods, which Apple includes in the sound calculation in real time, the sound positions remain stationary in the room even when the head is turned. I tried it with the AirPods Pro, which is stunning.
Score: 3 Votes (Like | Disagree)
Read All Comments

Saturday January 23, 2021 10:02 am PST by Juli Clover
October 18: Apple has announced the third-generation AirPods, available to order now ahead of an October 26 launch. This guide will be updated shortly. Apple is working on a third-generation version of the AirPods, and for this updated version rumored to be launching in 2021, we could see some design changes for the first time since the AirPods came out in 2016. This guide covers everything...
Read Full Article • 82 comments

Monday April 12, 2021 12:50 pm PDT by Juli Clover
When iOS 14 launched, Apple announced a new Find My network accessory program designed for third-party accessory makers, and in April 2021, Apple launched the initiative, allowing device makers to integrate Find My right into their products. With the Find My network accessory program, third-party accessory makers can add Find My integration to their devices, allowing products to be tracked...
Read Full Article • 70 comments

Thursday July 23, 2020 1:04 pm PDT by Juli Clover
Apple designed iOS 14 with several new features that improve how the AirPods and the AirPods Pro work with iPhones and iPads, including spatial audio, better device switching, battery notifications, and Headphone Accommodations for those who need help with sounds and frequencies. Subscribe to the MacRumors YouTube channel for more videos. This guide covers all of the new features that Apple...
Read Full Article • 51 comments

Tuesday December 29, 2020 12:45 pm PST by Juli Clover
Though 2020 forced Apple to shift how it operates with many employees working from home for most of the year, Apple still managed to get a long list of new products out over the course of the last 12 months, refreshing most devices in its lineup and introducing new software. Subscribe to the MacRumors YouTube channel for more videos. In our latest YouTube video, we rounded up our top five...
Read Full Article • 75 comments