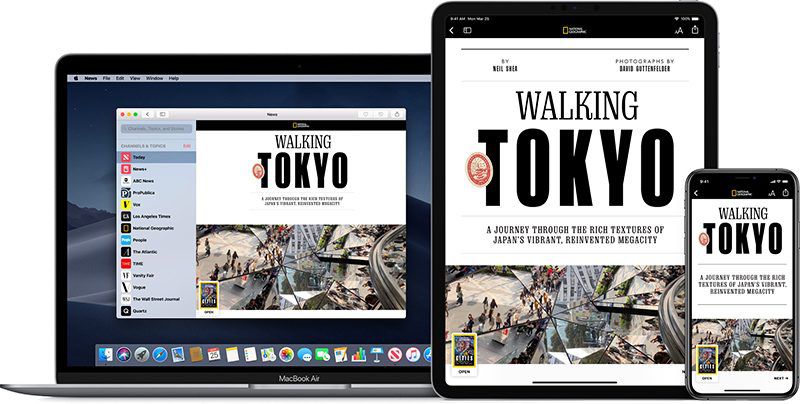 
Apple News+ content is available right in the Apple News app through the new Apple News+ tab that shows up on iPhones, iPads, and iPod touch models running iOS 12.2 or later and Macs running macOS Mojave 10.14.4 or later.

You need to be in the U.S., Canada, Australia, or the UK to be able to subscribe to and access Apple News content at the current time, though Apple has plans to expand it to additional countries in the future.

The $9.99 per month fee gives your entire family of up to six people access to Apple News+ as long as you have Family Sharing set up.


Apple is offering a 30-day free trial for Apple News+, and we have instructions on how to sign up here. You won't get charged the monthly fee until the free trial expires, but your free trial ends right when you cancel. 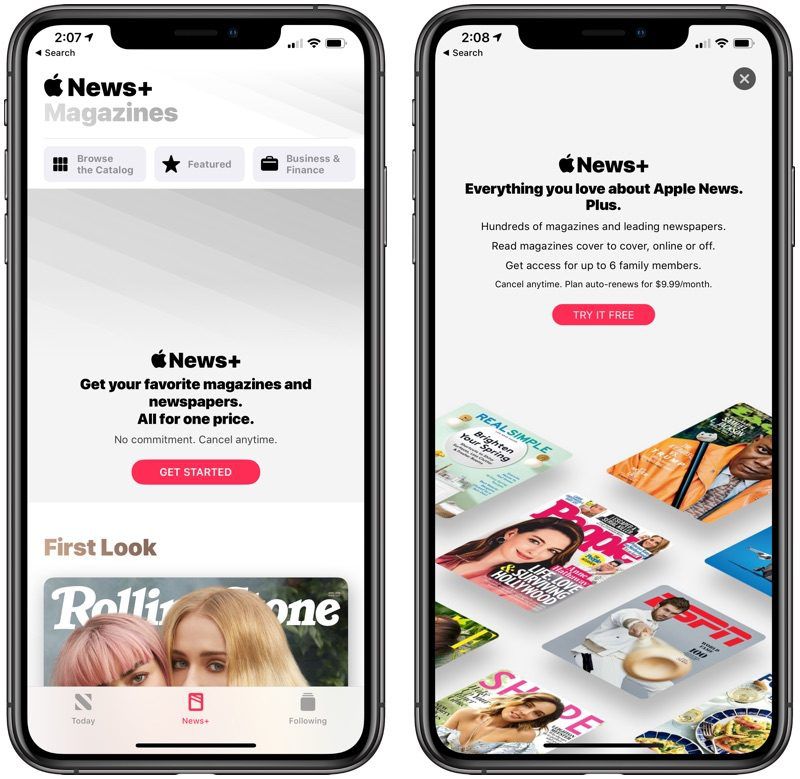 That means there's no option to sign up, cancel, and then use the service for a month. You'll need to keep yourself subscribed to continue to use the free trial, so we recommend setting a reminder ahead of when the trial expires so you can get the full 30-day test period without getting charged if you decide to cancel. 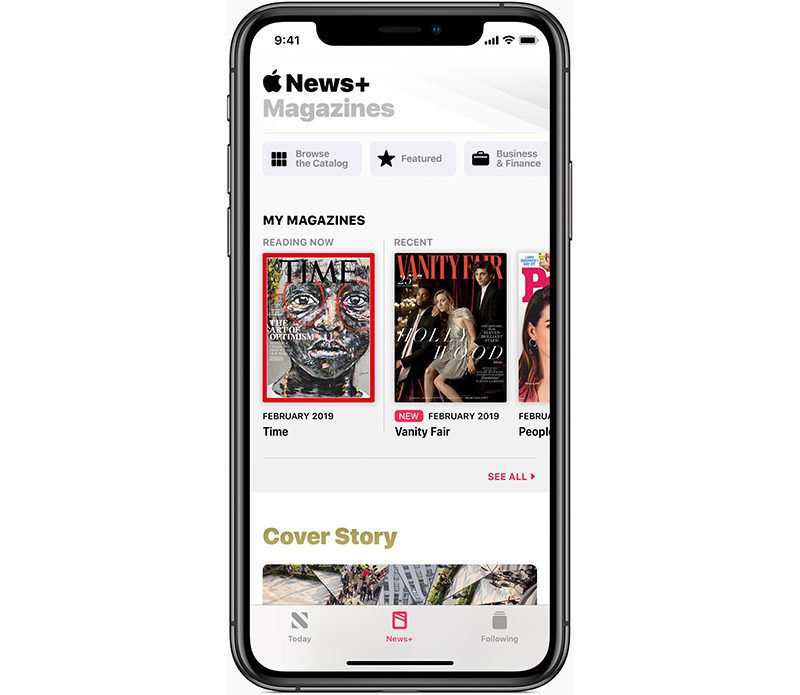 The Apple News+ section houses all available Apple News content, including magazines and newspapers, though if you come across Apple News+ articles from magazines news sites like The Wall Street Journal while browsing through the standard Apple News interface, that content will all be available for free to you.


The Apple News+ monthly fee gets you access to more than 200 popular magazines that cover a wide range of categories, including health, style and beauty, lifestyle, sports, finance and business, cars, entertainment, food, hobbies, home and garden, kids and parenting, news and politics, outdoors, science and tech, and travel.

Both past and current issues from a number of magazines are included. Based on a spot check, past issues seem to be available from March 2018 on, so no magazine is offering a full collection of past content. March 2018 is when Apple purchased Texture, the service that Apple News+ evolved from. 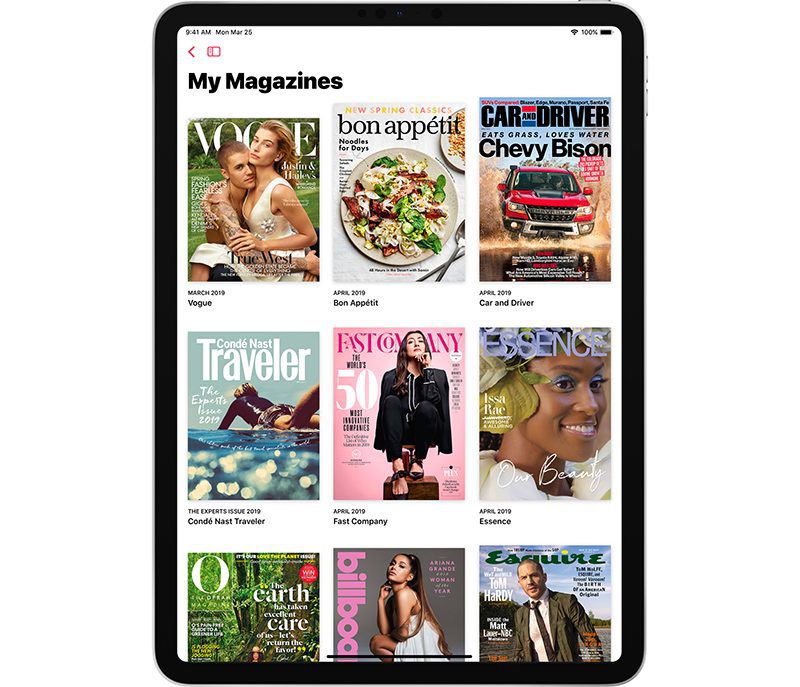 There are also several digital only subscription offerings included such as theSkimm, The Highlight by Vox, New York Magazine's sites Vulture, The Cut and Grub Street, and Extra Crunch from TechCrunch.


New issues of some magazines in Apple News+ are using a proprietary formatting designed just for Apple News+. It puts a table of contents right up front so you can see what articles are included and skip right to what you want to read, and it also supports full screen interactive media and other digital-first features. 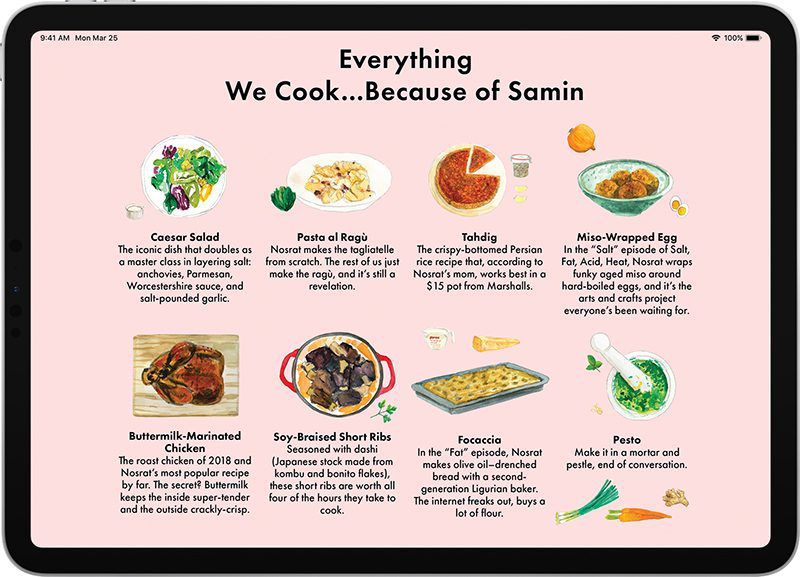 Some magazines have not been updated with this new format and their issues are plain PDFs that you can swipe through with none of these new features. All older issues even from magazines that do support the new Apple News+ digital format are also in PDFs. 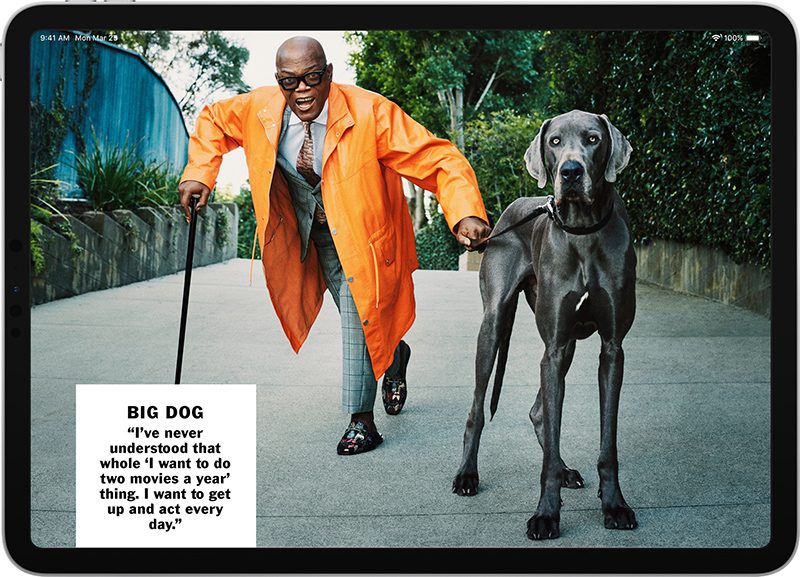 PDFs display all of the available pages in a magazine, but you'll essentially need to swipe through most of the magazine to see the specifics of what's available.

MacStories has a great list of all of the magazines that are available in Apple News+ in the United States at the current time, and which formatting those magazines are using.

Subscribing to a Magazine 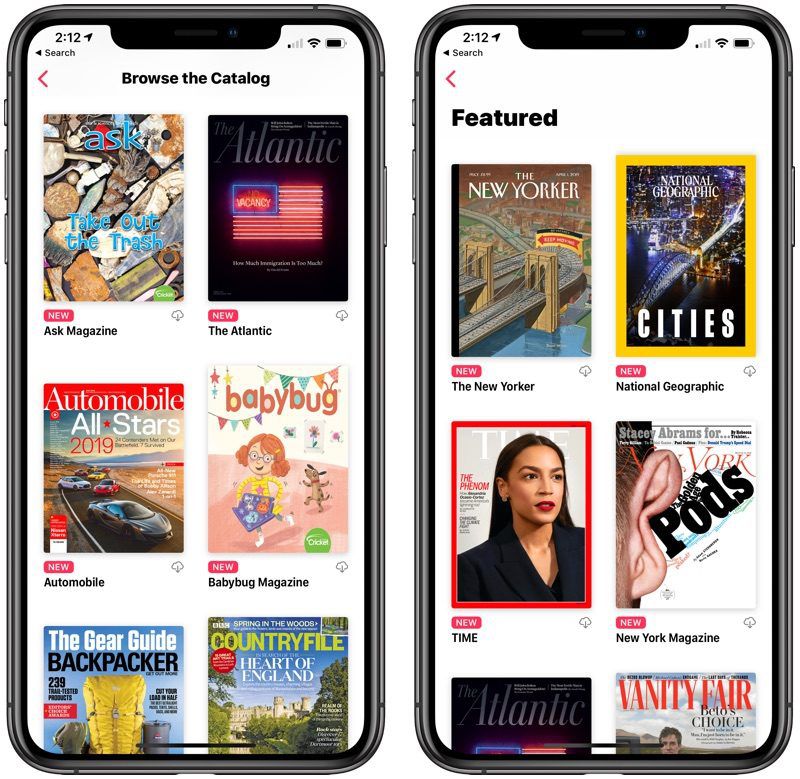 As of iOS 12.3 and macOS Mojave 10.14.5, you can also subscribe to a publication to follow directly from the Apple News+ catalog view by tapping on the "Follow" button. If you're still using an earlier version of iOS or macOS, you won't see the Follow button. 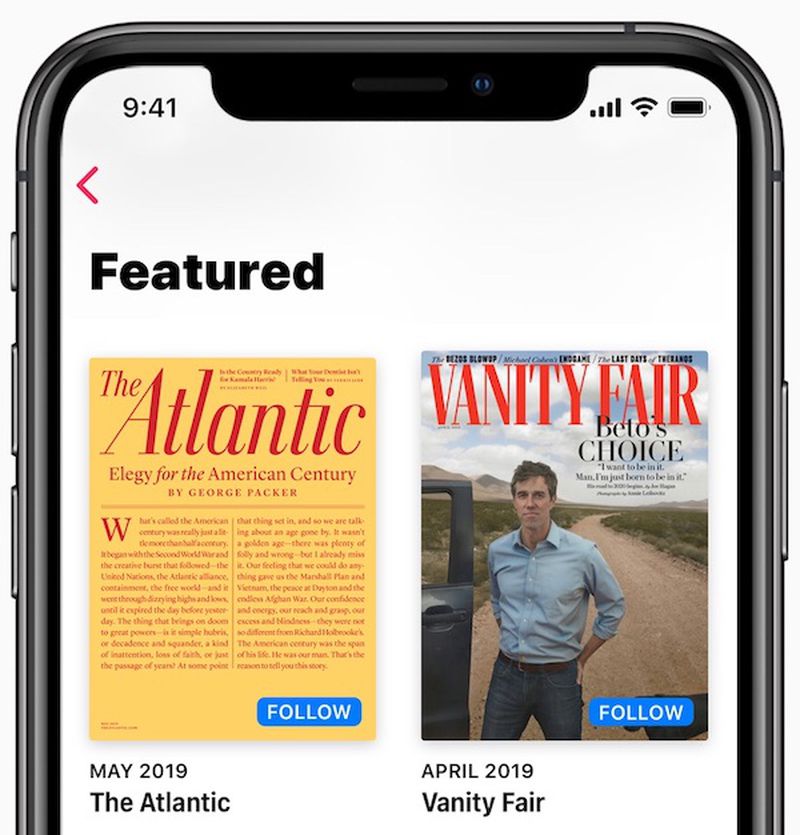 My Magazines seems to be a bit buggy at the current time because there's no way to remove magazines from the list, and not all magazines and content that you've read show up in the My Magazines list after exiting the app and reopening it. Apple will likely have some fixes coming for these issues that will improve the layout and available subscription tools.

Any magazine that you follow (aka have added a heart to) will be automatically downloaded to your device when a new issue is available.

Downloading a Magazine for Offline Reading


You can download any magazine in Apple News+ so that you can read it offline. When browsing through magazines, viewing new issues in the Apple News+ section, or looking at a magazine's overview with all of the available issues listed, tap on the little download icon next to any issue to make it available to read when you don't have a Wi-Fi or LTE connection. 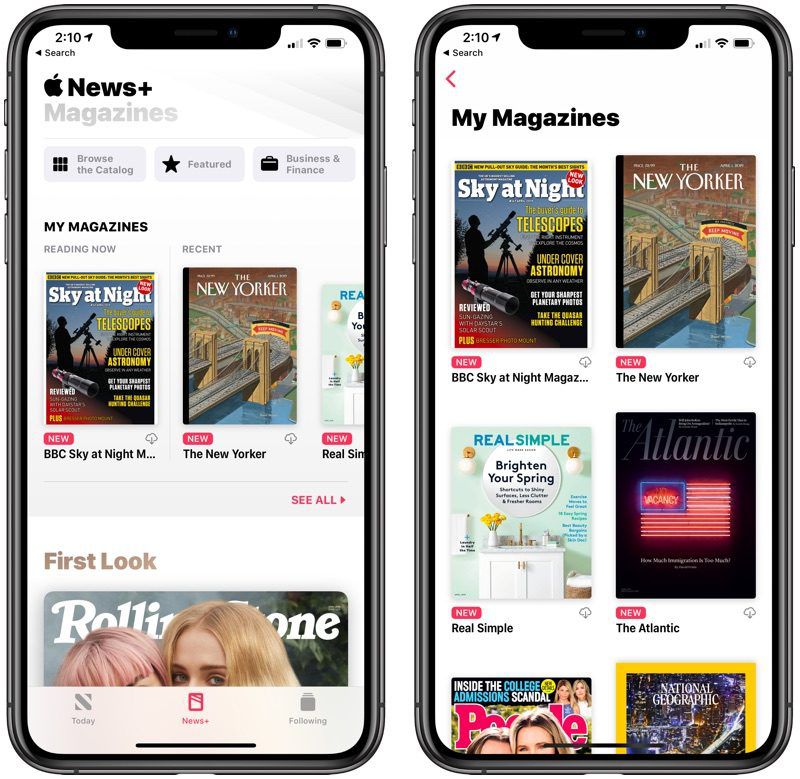 All of your downloaded Apple News+ magazines can be found both offline and online in the My Magazines section.

There have also been reports of issues with loading times and problems swapping between portrait and landscape mode. If you're having Apple News+ problems, sign out of iTunes in the Settings app and then sign back in. That seems to fix the problem people are having where they're not able to log in on a different device.


Apple News in the U.S., Canada, UK, and Australia continues to function as before for those who choose not to sign up for Apple News+. All of the content and news stories from your favorite news sites will still be available to read, you just won't get access to the magazines and paywalled content included in Apple News+. 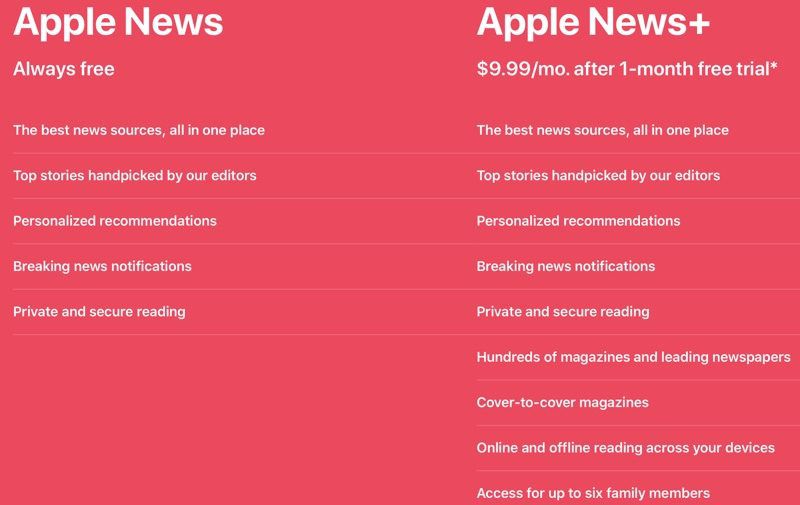 For non-subscribers, there are essentially no changes to the Apple News app with the exception of a new Apple News+ tab to ignore. Apple News will continue to offer access to Top Stories, Trending Stories, and a feed of personalized news articles.


If you already subscribe to a magazine that's now offered in Apple News+, you'll probably want to cancel whatever subscription you have, whether it's through Apple or through another subscription service.

For some publications, like The Wall Street Journal, there is a possibility you'll want to keep the standalone subscription. While all of the WSJ's content is available in Apple News+, the app is only going to surface "general interest" articles, which could make it difficult to find the full range of content offered. WSJ archives also only persist for three days.


If you are a Texture user, you should know that Texture shut down on May 28, 2019 on all platforms. Existing Texture customers need to sign up to Apple News+ and can take advantage of a one-month free trial to try the new service out.

Texture users on Android are no longer able to use the service will need to purchase an Apple device to access Apple News+.


See something we left out of our Apple News+ guide or have a question not answered here? Let us know in the comments or Send us an email here.