Accountsd: How to Fix High CPU Usage on Mac

Following the release of macOS Catalina version 10.15.7, an increasing number of users have experienced an issue with a system process named "accountsd" showing very high CPU usage in Activity Monitor, causing their Mac to slow down.

One user in the Apple Support Communities shared a screenshot of "accountsd" with CPU usage above 400%, rendering their 2018 MacBook Pro "useless." 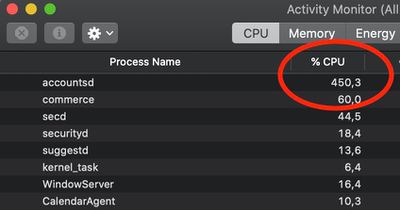 While this issue has popped up occasionally over the years, there has been a noticeable uptick in complaints across the Apple Support Communities, MacRumors Forums, Twitter, Reddit, Stack Exchange, and elsewhere since the release of macOS Catalina version 10.15.7, with users attempting to troubleshoot the issue.

Accountsd is a daemon, part of the Accounts framework. Apple's developer documentation says this framework helps users access and manage their external accounts from within apps, without requiring them to enter login credentials.

The Accounts framework provides access to user accounts stored in the Accounts database, which is managed by the system. An account stores the login credentials of a particular service, such as Twitter, and you use those credentials to authenticate with the service. When you integrate the Accounts framework into your app, you don't need to store account logins yourself. Instead, the user grants your app access to use their account login credentials, bypassing the need to type their username and password. If no account for a particular service exists in the user's Accounts database, you can let them create and save an account from within your app.

How to fix accountsd CPU usage?

Affected users have offered a wide range of potential solutions, but your mileage may vary.

Some users have managed to solve the issue by signing out of their Apple ID account under System Preferences > Apple ID > Overview > Sign Out, restarting their Mac, and then signing back in to the account, but this has not worked for everyone.

Some users have solved the issue by resetting their Mac's SMC and/or NVRAM.

One user on Stack Exchange believes the issue relates to a bug with file indexing on the Mac. Their solution involves resetting the indexing by navigating to System Preferences > Spotlight > Privacy and adding (+) your storage drive ("Macintosh HD" by default) to the "Prevent Spotlight from searching these locations" list. Then, remove (-) the drive from the list, and the Mac will begin reindexing. The indexing process can temporarily slow down your Mac, so these steps are recommended to be completed overnight.

As for more advanced troubleshooting, some users have had success with navigating to "~/Library/Accounts" and renaming the file "Accounts4.sqlite" to "Accounts4.sqlite.testbackup" or using more complex Terminal commands, but proceed with caution, as these solutions could impact your iCloud accounts or syncing.

Apple has yet to acknowledge this issue. Should a software update be released with a fix, we will update this article accordingly.

trip1ex
buying a new mac always solves the problem and is the official solution straight from Apple HQ
Score: 20 Votes (Like | Disagree)

navaira
There is a bug in Catalina?

aloshka
I think this has been happening for the last 2-3 years (including Mojave) for me anyway. If apple is aware of it, it’s not priority and probably will not be fixed.
Score: 13 Votes (Like | Disagree)

Internet Enzyme
This type of crap is so pervasive in macOS. . . Some stupid process like “photolibraryd” or something will just toss a plurality of your CPU into a bottomless pit
Score: 12 Votes (Like | Disagree)

WannaGoMac
Yet another reason to stick with Mojave...
Score: 9 Votes (Like | Disagree)

Dr. James
Yep, happened to me with a 2015 Macbook Pro. The whole OS was useless. To fix it, I signed out of iCloud and then signed in. No restart required.
Score: 8 Votes (Like | Disagree)
Read All Comments

Apple's 2022 iPad Pro: Everything We Know

Wednesday February 16, 2022 1:55 pm PST by Juli Clover
Apple is working on a next-generation version of the iPad Pro, and while there are no major design updates that we know of, there are some new features that are worth looking forward to. This guide aggregates everything that we know about the 2022 iPad Pro so far based on the rumors that we've heard. Mini-LED Display Apple last year introduced an updated 12.9-inch iPad Pro with mini-LED...
Read Full Article • 220 comments

Monday March 14, 2022 1:45 pm PDT by Juli Clover
Apple today released iOS 15.4 and iPadOS 15.4, the fourth major updates to the iOS 15 and iPadOS 15 operating systems that first came out in September. iOS and iPadOS 15.4 are huge updates that bring quite a few useful new features to the iPhone and the iPad. Subscribe to the MacRumors YouTube channel for more videos. Face ID With a Mask With iOS 15.4, there is now an option to unlock your...
Read Full Article • 130 comments

Tuesday February 1, 2022 2:02 pm PST by Tim Hardwick
Apple's Macs and iPads include support for two separate features called Sidecar and Universal Control that allow the devices to be used together, but in different ways. Subscribe to the MacRumors YouTube channel for more videos. In this guide, we'll go over everything you need to know about Universal Control and how it differs from the Sidecar feature that's been available since 2019. What...
Read Full Article • 66 comments

Thursday February 10, 2022 1:26 pm PST by Tim Hardwick
In iOS 15.4 and macOS Monterey 12.3, Apple introduced Universal Control, a feature designed to allow you to control multiple Macs and iPads with a single trackpad/mouse and keyboard. This article offers solutions to the most common problems encountered when getting Universal Control to work. With Universal Control, you can use your main Mac's trackpad and keyboard to control additional Macs...
Read Full Article • 65 comments

Thursday December 2, 2021 10:39 am PST by Tim Hardwick
Apple released macOS Monterey to the public in the fall, and the new desktop OS brings a whole slew of useful new features and changes to apps like Safari, Maps, FaceTime, Notes, Photos, Messages, and more. Subscribe to the MacRumors YouTube channel for more videos. Beyond the headline features, Apple has also made numerous tweaks and changes to macOS that aim to make the time you spend using ...
Read Full Article • 72 comments

Thursday December 8, 2022 7:05 am PST by Joe Rossignol
iOS 16.2 is expected to be released next week following nearly two months of beta testing. With last-minute additions like Apple Music Sing and Advanced Data Protection, the software update now has over a dozen new features for the iPhone. Below, we've recapped many of the new features coming with iOS 16.2, including Apple's new whiteboard app Freeform, two new Lock Screen widgets, the...
Read Full Article • 63 comments