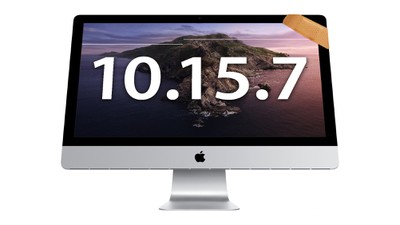 The ‌‌‌macOS Catalina‌‌‌ 10.15.6 Supplemental Update can be downloaded from the Mac App Store using the Update feature in the System Preferences app.

According to Apple's release notes, macOS Catalina 10.15.7 addresses an issue where macOS would not automatically connect to WiFi, it fixes a bug that could prevent files from syncing through iCloud Drive, and most notably for new iMac owners, it fixes an issue that was causing a small white flashing line to appear on machines equipped with the Radeon Pro 5700 XT.

- Resolves an issue where macOS would not automatically connect to Wi-Fi networks
- Fixes an issue that could prevent files syncing through iCloud Drive
- Addresses a graphic issue that may occur on iMac (Retina 5K, 27-inch, 2020) with Radeon Pro 5700 XT

Some features may not be available for all regions, or on all Apple devices. For detailed information about the security content of this update, please visit: https://support.apple.com/kb/HT201222

Since the launch of the 27-inch ‌iMac‌ in August, there have been complaints about a graphical glitch with the model that includes the higher-end a 5700 XT GPU. Many users have reported seeing flashes of a horizontal white line, and while it was unclear if it was a software or hardware issue, today's fix indicates that it was indeed a software-related bug.

God I miss those years. Bertrand Serlet was the head OS X engineer for 10.4 - 10.6 and also headed the Intel transition. Snow Leopard will always be the holy grail of OS X releases.

Apple should return to two year cycles. I remember having to wipe my Mac Pro with each biweekly development release and install each fresh. It allowed for proper debugging by eliminating possible third party apps and plugins from interfering in properly ironing out OS bugs while allowing developers plenty of time to work on their apps. Then Cook wanted to cash in on the Mac App Store by aligning OS X releases to iOS annual cycles to entice more developers and cash in on a new revenue stream with the Mac App Store.

the genius of Jobs was his ability to see simplicity and make it work. When he returned to Apple in the late 90’s he slashed Scully era projects and created the now infamous Quadrant focusing on core products:

simple. No product fragmentation. Reasonably priced systems that balanced form and function perfectly. Jony Ive made his visions come to life and Cook ran the financials. It was the perfect trio.

Now we have three iPhone sizes and each have different features, iPad/iPad mini/iPad Air/iPad Pro 11 and 12, MacBoo Air, MacBook Pro 13/16, mac minis, but only one 27” iMac and a $6000 Mac Pro. Then Apple Watches with endless bands, HomePods, AppleTV and AppleTV 4K, iPod Touch, etc etc etc

I miss the three dedicated displays that ranged from 20”, 23”, and the award winning 30” ACD professionals used that didn’t cost $5999 without a stand.

Then they ditch their airport line instead of moving to mesh systems while pushing harder into streaming services. If 90% of your product line and services depend on wireless networking, why ditch a stellar network product line? Update it or buy out a company producing next gen mesh systems and bring them in house. Add mesh networking into HomePods and AppleTV’s as they’re already HomeKit hubs. Don’t wipe a central product line and sell third party systems that are hit or miss in working with the very products that depend on them to function. I knew Cook had to have made that decision as it‘s very typical of CFO’s to see only what may be and not what can be, thinking primarily about cutting divisions shortterm while not understanding the longterm consequences. Ever since they ditched their AirPort line consumers have had to fend for themselves in finding systems that work with Apple products.

I feared Cook would run Apple like Scully and he is only focused on one thing: stocks and marketshare. Jobs knew to create stellar products first and everything else would follow. He brought Apple out of bankruptcy and paved the way in reshaping numerous markets. Before the iPhone, cellular companies would not allow mobile device manufacturers to run their own software. It had to be Verizons or Sprints. AT&T was the only carrier who agreed to Jobs’ insistence on running iPhoneOS on Apple’s first iphones. After the success, Verizon agreed followed by other carriers and soon Android came out and the days of mobile phones running carrier OS’s became a distant memory.

Jobs was difficult but he knew exactly how to make it work.

First recent macOS release with a 10.x.7 update. I think the last time this happened was when we were on two year upgrade cycles.

I realize things are odd this year due to Covid, but I'm glad Apple is staggering releases a bit more this season. I hope they consider returning to longer development cycles and spacing out releases during the year as they used to, thus (hopefully) shipping better software and allowing products to reach further maturity through updates before the next version ships. They are trying to throw too much stuff out the door at the same time every year and it is impossible for any organization to do that well. One or two things at a time, please!

After the disastrous MobileMe launch, Steve Jobs sent a mea culpa email ('https://www.cultofmac.com/495868/today-in-apple-history-steve-jobs-acknowledges-mobileme-failure/'), including the following:

It was a mistake to launch MobileMe at the same time as iPhone 3G, iPhone 2.0 software and the App Store. We all had more than enough to do, and MobileMe could have been delayed without consequence.

Apple has more than enough to do with each major OS release. Slow it down, stagger the releases, and get stuff right.
Score: 19 Votes (Like | Disagree)

FocusAndEarnIt
First recent macOS release with a 10.x.7 update. I think the last time this happened was when we were on two year upgrade cycles.

EDIT: Yep, I was right. Last time we had a release go past 10.x.6 was Mac OS X Snow Leopard 10.6.8, of which was the last macOS release on a two year upgrade cycle (and still supported the first Rosetta, mind you!). Catalina has really been a crapshoot. For perspective, first time this has happened in over TEN years. C'mon Apple & Craig Federighi. Hoping Big Sur will be better.
Score: 12 Votes (Like | Disagree)

jprmercado
Well, this is definitely a [welcome] surprise for me and my 2012 MacBook Pro. ?
Score: 11 Votes (Like | Disagree)

Glad to know you know everything that goes on inside of Apple on a daily basis...

I think I know Apple pretty well. I have been a developer since the developer program cost $1500/yr and MPW came in 3-ring binders. I worked for an Apple dealer (long before Apple Stores came about) and I have exhibited at MacWorld. Steve was deeply connected to almost every significant decision in the company.
Score: 7 Votes (Like | Disagree)

Wednesday August 12, 2020 1:20 pm PDT by Juli Clover
Apple today released a supplemental update for macOS Catalina 10.15.6, with the update coming a month after the original launch of macOS Catalina 10.15.6. The ‌‌macOS Catalina‌‌ 10.15.6 Supplemental Update can be downloaded from the Mac App Store using the Update feature in the System Preferences app. According to Apple's release notes, the update fixes a problem that could cause...
Read Full Article • 131 comments

Monday June 7, 2021 12:06 pm PDT by Juli Clover
After today's keynote event that saw the introduction of macOS Monterey, the latest version of the Mac operating system, Apple has seeded the first beta of macOS Monterey to developers for testing purposes. Registered developers can download the beta through the Apple Developer Center and once the appropriate profile is installed, betas will be available through the Software Update...
Read Full Article • 84 comments

Monday May 24, 2021 10:08 am PDT by Juli Clover
Apple today released macOS Big Sur 11.4, the fourth major update to the macOS Big Sur operating system that launched in November 2020. macOS Big Sur comes one month after the release of macOS Big Sur 11.3, an update that added M1 optimizations, AirTag integration, and more. The new ‌‌‌‌macOS Big Sur‌‌‌ 11.4 update can be downloaded for free on all eligible Macs using the...
Read Full Article • 155 comments

Tuesday May 4, 2021 2:32 pm PDT by Juli Clover
Apple today released a new version of Safari 14.1 for macOS Catalina and macOS Mojave users, with the update introducing fixes for two WebKit vulnerabilities that were patched in macOS Big Sur yesterday. Apple's support document for the updated Safari release confirms that it addresses the same WebKit memory corruption issue and an integer overflow bug for users of older versions of macOS. ...
Read Full Article • 45 comments