Everything That's Changed in the New 2023 HomePod

Apple this week unexpectedly announced the second-generation full-sized HomePod, around two years after it discontinued the original smart speaker. 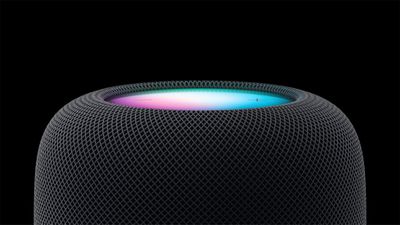 Priced at $299, the new HomePod joins the HomePod mini in Apple's line of TV and home products. A lower price tag at launch, a slightly tweaked design, and new features could help to make the second-generation HomePod more successful than its predecessor, which failed to capture mainstream market share and was ultimately discontinued. Below, we've highlighted what exactly has changed with the second-generation HomePod compared to the first-generation smart speaker.

The new HomePod is equipped with the same S7 chip as found in the Apple Watch Series 7, whereas the original HomePod uses the A8 chip from the iPhone 6 and iPhone 6 Plus. Apple says the new chip offers "even more advanced computational audio."

The new HomePod has four built-in microphones, compared to six in the original model. Apple says the microphones support "far-field Siri," allowing users to activate the voice assistant from a distance.

The latest HomePod also has fewer tweeters than the original model. Apple's specs sheet reveals the new HomePod has five tweeters around its base, compared to seven in the original smart speaker. The tweeters help power HomePod's acoustic performance by optimizing "high frequencies to produce detailed, articulate audio with stunning clarity." The reduction in the number of tweeters and microphones was likely a cost-cutting measure by Apple. Whether this will result in a noticeable drop in audio performance is currently unknown.

The sensor can measure indoor environments, allowing users to create automations that close the blinds or turn on a fan or heater automatically when a certain temperature is reached in a room, for example. This information is exposed in the Home app like any other smart home accessory.

One of the noticeable design changes with the updated HomePod is a larger backlit touch interface on the top of the speaker. Compared to the original HomePod, the new model features a significantly larger interface that glows and illuminates different colors to show varying statuses of the speaker and when Siri is in use.

The new HomePod weighs 5.16 pounds, compared to 5.5 pounds for the original smart speaker. The upgraded HomePod is also 6.6 inches tall, while the original stood at 6.8 inches. Both HomePods feature the same width of 5.6 inches.

Thread and U1 Ultra Wideband Chip

The new HomePod supports Thread, a connectivity standard for smart home devices that improves connectivity by letting Thread devices talk directly to each other via a low-power mesh network. The original HomePod lacked Thread support, with only the HomePod mini having compatibility.

The new HomePod also has a built-in U1 Ultra Wideband chip, which detects when other U1-equipped devices like newer iPhone models are nearby and allows them to quickly hand off audio to the smart speaker.

With the new HomePod, there are two things that have not changed: Lack of Bluetooth audio support and line-in audio. Unlike many other portable speakers, the new HomePod cannot function as a standalone Bluetooth speaker. While the HomePod includes Bluetooth to communicate with HomeKit and other devices, users must pair the HomePod with their iPhone or iPad and use Apple's AirPlay protocol or Siri to play audio.

Perhaps unsurprisingly, the new HomePod also lacks an audio jack, optical audio port, or any other ports. All interaction with the HomePod is done wirelessly using Apple devices.

Zachintosh
The wifi downgrade is a huge bummer. Premium smart speakers are supposed to be pieces of hardware you keep for a long time, and Apple just released a 2023 product with a 2009 wifi radio.
Score: 32 Votes (Like | Disagree)

KrisLord
I’m super pleased that there is a future for HomePod after the original was cancelled.

However this model doesn’t really seem like the future. It’s got less speakers (so potentially lower quality than the original) and it’s super expensive.

Didn’t the original model fail to sell mainly because it was overpriced?
Score: 27 Votes (Like | Disagree)

dantracht
Short answer: not a heck of a lot. I’m glad there’s an option, and I would grab two when my OG pair die, but this is a lazy release for $100 too much.
Score: 24 Votes (Like | Disagree)

sorgo
Wow, so (audio) hardware-wise it actually looks like a downgrade over the original… :confused:

Edit: Also, did this article leave out the temperature/humidity sensing?
Score: 16 Votes (Like | Disagree)
Read All Comments

Tuesday January 24, 2023 1:11 pm PST by Joe Rossignol
While the new Mac mini with the M2 chip has a lower $599 starting price, the base model with 256GB of storage has slower SSD read and write speeds compared to the previous-generation model with the M1 chip and 256GB of storage. A teardown of the new Mac mini shared by YouTube channel Brandon Geekabit reveals that the 256GB model is equipped with only a single 256GB storage chip, while the...
Read Full Article • 579 comments