Starting with iOS 16.2, iPadOS 16.2, and macOS 13.1, all of which are expected to be released next week, users have the option to enable a new Advanced Data Protection feature that expands end-to-end encryption to many additional areas of iCloud, including Messages backups, Photos, Notes, Reminders, Voice Memos, and more. 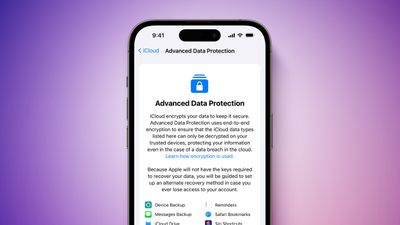 To protect users, Apple does not allow Advanced Data Protection to be enabled from a brand new device for an unspecified period after the device was first set up and added to a user's Apple ID account. We have seen dates range from late January to early February for when users will be able to turn on the feature from a new device. This buffer helps to prevent a malicious actor from enabling the feature if a user is hacked.

Users can still enable Advanced Data Protection from an older device they added to the same Apple ID account, such as another iPhone, iPad, or Mac. In this case, all devices added to that Apple ID account are fully protected by the expanded end-to-end encryption for iCloud, including newer ones that are still in the waiting period.

When Advanced Data Protection is enabled, access to your data via iCloud.com is disabled by default. Users can turn on data access on iCloud.com, which allows the web browser and Apple to have temporary access to data-specific encryption keys.

iCloud already protects 14 data categories using end-to-end encryption by default, without Advanced Data Protection enabled, including passwords stored in iCloud Keychain, Health data, Apple Maps search history, Apple Card transactions, and more. Apple has a support document with a chart detailing what is protected by standard levels of encryption and what is protected by Advanced Data Protection when enabled.

Advanced Data Protection is available for U.S. users only at launch and will start rolling out to the rest of the world in early 2023, according to Apple. For more details about the feature, read our coverage of Apple's announcement earlier this week.

Rigby
Probably to prevent the scenario where an attacker somehow gains access to someone's account and then uses their own device (never registered to the victim's Apple ID) to enable advanced protection. This would permanently lock out the victim since Apple cannot help recover the data when advanced protection is enabled. The delay gives the victim enough time to change the password and remove the attacker's device from the account.
Score: 47 Votes (Like | Disagree)

now i see it
Likely to save people from themselves. While encrypted iCloud is great - plenty of people are going to get royally burned by it when they forget stuff
Score: 25 Votes (Like | Disagree)

FreakinEurekan
The FUD is strong in this thread.

* If you have a device that’s been active for a while, you can turn it on.
* If you turn it on, it’s on for ALL devices.
* The reason you can’t use a recently activated device, is so if someone compromises your account and signs in on a device, they can’t lock you out of your data.
Score: 24 Votes (Like | Disagree)

trip1ex
I just created a YouTube channel under a new gmail account and put all my photos and video on there where I know no one will view it.
Score: 17 Votes (Like | Disagree)

It sounds like the new users are under probation for a few months, then they are qualified for it. Is that seem odd to you?

From a new device. If you have another device on your iCloud account already, you can still turn it on. You just can’t turn it on from a recent added device.
Score: 10 Votes (Like | Disagree)

So if I have an iPhone 13, turn on "Advanced Data Protection" and encrypt my iCloud backups, and then next month, I buy a brand new iPhone 14 and copy my iPhone 13 over to it, does that mean my backups on the new iPhone 14 are now all of sudden unencrypted until I am allowed to turn on this feature again in two months?

This makes no sense.

No, advance data protection is account wide. If you're able to enable it on iPhone 13 it will also be on iPhone 14. But the waiting period still exists for new starts on new devices.
Score: 9 Votes (Like | Disagree)
Read All Comments