Do-it-yourself repair website iFixit today shared a video teardown of Apple's new 10th-generation iPad, providing a closer look inside the tablet and revealing why the device lacks support for the second-generation Apple Pencil.


The teardown reveals the internal layout of the iPad, including its two-cell 7,606 mAh battery, logic board with the A14 Bionic chip, and more.

As suspected, the teardown shows that components for the iPad's landscape-positioned front camera occupy the space where the wireless charging coil would have been located for the second-generation Apple Pencil. As a result, the device is only compatible with the first-generation Apple Pencil, with an adapter required for pairing and charging. 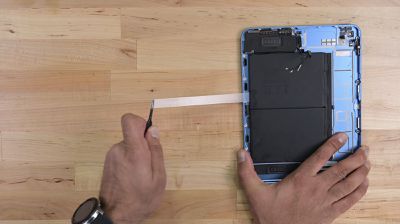 Image Credit: iFixit
iFixit also confirmed that the iPad has stretch-release battery pull tabs like the fifth-generation iPad Air and the sixth-generation iPad mini, making it easier for repair shops and customers to replace the battery. In comparison, the ninth-generation iPad and many other older iPads have completely glued-in battery cells.

iFixit was disappointed that the iPad's USB-C port is soldered to the logic board and noted that Apple's self-service repair program does not currently offer parts, manuals, or tools for iPads, making it harder for customers to complete their own repairs.

vegetassj4
Tim Cook: We've got a ton of excess Apple Pencil inventory, figure out how to sell them
Marketing: We need to generate demand for 7+ year old device
Engineer: We could enable it's use in the upcoming iPad
Marketing: Make sure the design has an excuse as to why it can't use the New Pencil, or we will look greedy
Tim Cook: cha-ching
Score: 25 Votes (Like | Disagree)

Tim Cook: We've got a ton of excess Apple Pencil inventory, figure out how to sell them
Engineer: We could enable it's use in the upcoming iPad
Marketing: Make sure the design has an excuse as to why it can't use the New Pencil, or we will look greedy
Tim Cook: cha-ching

Hate to say this but that is probably what happened. Spot on! Apple hates wasting extra inventory and they don't have the courage to lower the prices of old-generation stuff either :(
Score: 21 Votes (Like | Disagree)

Spaceboy88
This may sound crazy, but couldn't Apple...you know...just moved the wireless charging coil to a different part of the iPad? ?
Score: 20 Votes (Like | Disagree)

raindogg
Apple could have made a USB C dongle that has a magnetic charger for the Pencil 2.

TheYayAreaLiving ?
This iPad was meant to be skipped. I'm waiting for the next iPad. Let it be a 16" iPad Pro Max or iPad Ultra. Whatever you want to call it, Apple.
Score: 12 Votes (Like | Disagree)

appleguy123
I see plenty of room on the portrait side for the Apple Pencil 2.
Score: 10 Votes (Like | Disagree)
Read All Comments

Tuesday January 31, 2023 8:29 am PST by Joe Rossignol
When the original HomePod launched in 2018, it was discovered that the speaker can leave white rings on some wooden surfaces. Now, well-known YouTuber Marques Brownlee has confirmed that the issue persists to a lesser extent with the new HomePod. In a side-by-side test, he showed that the white second-generation HomePod left a white ring on the wooden surface that he placed the speaker on,...
Read Full Article • 76 comments