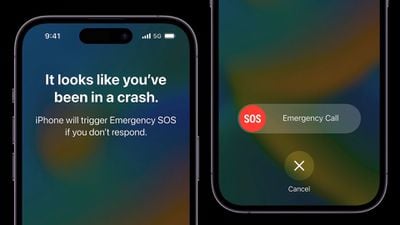 Designed to summon help when a car crash is detected, the Crash Detection feature can be activated at ski resorts, and Summit County dispatchers in Utah have seen an increase in 911 calls.

"We will get a call in that says the owner of this Apple Watch or iPhone has either had a severe crash or they've been involved in a car accident," Summit County Dispatch Center supervisor Suzie Butterfield told KSL.

With many of the activations, people don't respond at first because they are unaware that the call was placed. "They're usually like, 'Oh, I'm sorry, I was skiing. Everything's fine,'" said Butterfield.

Three to five emergency calls from Apple devices are coming in per day, and so far, none have been activated on purpose. Butterfield said that she doesn't mind the accidental calls because the feature could be useful in an actual emergency situation.

Reddit users have confirmed that skiing can trigger the Crash Detection feature, with one user explaining that he was going down a hill at a moderate pace when his Apple Watch started to dial 911.

You might want to turn off crash detection on your iPhone 14 if you ski with any kind of pace at all. I was out yesterday for the first time. I had my phone in my pocket and was cruising down Tinkerbell at a totally moderate pace doing some short-radius turns on my second run of the year. To give you an idea of how moderate, I had just passed a slow sign with 3 safety patrol by it and none of them even raised an eyebrow at me! I stopped to wait for my wife and my phone immediately started yelling "Have you been in an accident? We will call emergency services in 20 seconds! Woop! Woop!" I turned it off as quickly as possible and then immediately turned off all the emergency notification functions.

In addition to Crash Detection on the ‌iPhone 14‌ models, the Apple Watch Series 8, the new Apple Watch SE, and the Apple Watch Ultra, there's also a fall detection feature on a range of Apple devices that could potentially result in emergency calls as well.

Butterfield said that she does not recommend turning the ‌iPhone‌ and Apple Watch safety features off. "We don't mind taking that call because if something really did happen, we want to be able to get to you," she said.

The Crash Detection feature in the new ‌iPhone‌ and Apple Watch models has also been triggered by rollercoasters, and just today, Apple released an iOS 16.1.2 update that includes "Crash Detection optimizations." Apple has not provided information on what this means, but it likely is aimed at cutting down on accidental triggering where there has not been an actual car accident.

Three to five emergency calls from Apple devices are coming in per day, and so far, none have been activated on purpose.

Don’t they mean, “on accident”?

TracesOfArsenic
Is it any surprise these aren't working properly? Timmy's Apple doesn't believe in testing, just gotta pump out those annual releases on the clock, baby!
Score: 19 Votes (Like | Disagree)

Is it any surprise these aren't working properly? Timmy's Apple doesn't believe in testing, just gotta pump out those annual releases on the clock, baby!

What do you mean? It’s being tested right now on millions of devices.
Score: 13 Votes (Like | Disagree)

Is it any surprise these aren't working properly? Timmy's Apple doesn't believe in testing, just gotta pump out those annual releases on the clock, baby!

Would you rather get a false alert in some situations than it not working when you actually have an accident? Just disable it whenever you are skiing or on a rollercoaster and enable it afterwards again ...

I mean, just read the article instead of bashing:

Butterfield said that she doesn't mind the accidental calls because the feature could be useful in an actual emergency situation.

Butterfield said that she does not recommend turning the iPhone and Apple Watch safety features off. "We don't mind taking that call because if something really did happen, we want to be able to get to you," she said.

TVreporter
Apple engineer: Works for surfing, probably just as good on a ski hill. Ship it!
Score: 10 Votes (Like | Disagree)
Read All Comments