It is almost Black Friday, the largest shopping day in the United States, where retailers mark down all matter of products ahead of the holidays. Small businesses and major retailers alike are offering sales on tech devices and accessories, so we thought we'd round up some of the best HomeKit deals for those who are looking to expand their Apple smart home ecosystems. 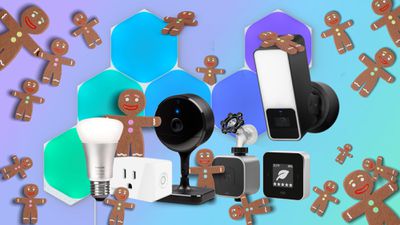 Note: MacRumors is an affiliate partner with some of these retailers. When you click a link and make a purchase, we may receive a small payment, which helps us keep the site running.

For more Black Friday deals on Apple products ranging from Macs to iPhones to Apple Watches, make sure to check out our dedicated Black Friday roundup.

antibolo
Seems like the worst possible time to buy smart home appliances, when Matter is right around the corner? Better to wait a bit still for devices that won't lock you into a single ecosystem...
Score: 4 Votes (Like | Disagree)

I hate homekit with the fire of 1000 suns

Your statement is completely meaningless without specifics.

And I have numerous Homekit devices--bulbs, lock, switches-- and Homekit makes many things much easier to use. I love homekit with the intensity of 1000 suns.
Score: 4 Votes (Like | Disagree)

From what I remember it waa Apple, but I could be wrong

antnythr
I've made the decision to not buy any more smart devices that aren't Matter certified. Why lock myself into an ecosystem?
Score: 2 Votes (Like | Disagree)

salutcemoi
I hate homekit with the fire of 1000 suns
Score: 2 Votes (Like | Disagree)

I also have 3 Lifx lights, for some reason only 1 of them has been paired with HK, for some reason I couldn't connect the other 2 to it, and I tried every troubleshooting step, checked Wifi settings , 2,4 ghz, 5 ghz etc

But I had no issue connecting all 3 of them to Google and Alexa
But for that 1 light that is connected, when I use Siri, it's really fast, I have to admit

I too wanted to use HK exclusively, and I like how I can access it via the control center in my iPhone/iPad, but alas.....

EDIT : just saw that Kasa plugs are mentioned in the original post ; is HK support back on the menu? I bought mine a few years ago and at the time Apple has stopped supporting Kasa plugs

Is it Apple that stopped support or Kasa?

HomeKit is far from perfect, but it works well enough for me to use.
Score: 1 Votes (Like | Disagree)
Read All Comments