Twitter CEO Elon Musk plans to eliminate a Twitter feature that provides details on what device a tweet was sent from, information that has gotten Android promoters in hot water multiple times over the past several years. 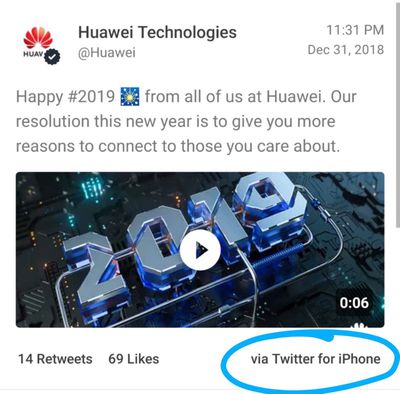 Musk said in a tweet this morning that Twitter will be eliminating the line that says "Twitter for iPhone" or "Twitter for Android," as this is a "waste of screen space." He said that "no one even knows" why the feature was introduced in the first place.

Device details have been used several times to catch employees promoting Android-based smartphones from their iPhones. In 2019, for example, a Huawei employee wished Huawei followers a happy new year, but used an ‌iPhone‌ to do so. A screenshot of the tweet went viral, and the employees involved were demoted for causing "damage to the Huawei brand."

Samsung employees have tweeted Samsung promotions from iPhones multiple times over the years, and celebrities have also gotten into trouble. Actress Gal Gadot, for example, sang the praises of her new Huawei Mate 10 Pro while tweeting from an iPhone.

It is not clear when the device labels will be removed, but as of right now, the feature is still in place. Musk also said that he has instructed Twitter employees to turn off unspecified "microservices" bloatware, as "less than 20% are needed for Twitter to work."

And we will finally stop adding what device a tweet was written on (waste of screen space & compute) below every tweet. Literally no one even knows why we did that … — Elon Musk (@elonmusk) November 14, 2022

Musk last week implemented his new $8 Twitter Blue subscription service, which provides a verification badge that was previously limited to verified individuals. It resulted in immediate chaos with a number of people paying $8 to impersonate companies and celebrity accounts. Insulin maker Eli Lilly, for example, saw its stock fall more than 4 percent after a verified account impersonated the company and announced that insulin was free. Another person impersonated LeBron James and announced he was requesting a trade, while yet another account impersonated Nintendo and tweeted an image of Mario making a rude gesture.

Twitter ended up pausing the Twitter Blue verification temporarily, and people are not able to purchase Twitter Blue subscriptions at this time. Twitter has been considering another "Official" verification badge, and it is not yet known how the company will solve the problem.

contacos
He was also just pissing on his engineers and then fired a guy for pointing out he was wrong.

My boss isn’t a holy spirit. If he’s wrong he’s wrong and I tell it to his face and he’s happy to be corrected. Thats how a good work relationship should work. I wouldn’t even let my mother talk down on me as a grown ass person
Score: 44 Votes (Like | Disagree)

Does your boss tweet at you publicly in a way that strongly implies you're incompetent?

All the guy did was answer Musk's questions, quite professionally, in the same place where they were asked. It's not his fault Musk made himself look like a complete idiot in the process.
Score: 41 Votes (Like | Disagree)

xxray
Charging money for features that are currently free and taking away features that have always been there… great way to keep your user base and grow your business!
Score: 36 Votes (Like | Disagree)

Knowing i'm right, and also in a very unstable employment position already in a company going downhill that has had mass layoffs, I'd probably go with it. Money/Positions of power can't save you from looking like a clown, which the employee was able to do to Elon.
Score: 34 Votes (Like | Disagree)
Read All Comments