Meta has scrapped the development of its health and messaging-focused smartwatch, in an abrupt end to the company's plans to directly compete with the Apple Watch. 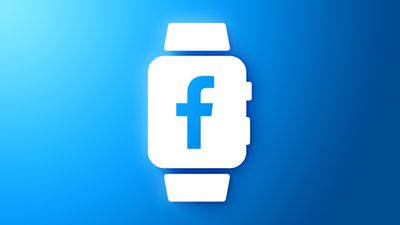 Employees were reportedly told on Friday that work on its smartwatch project would be halted as part of a cost-cutting effort that will involve structural changes to the company.

Rumors about Meta's plans to bring a smartwatch to market first appeared in February 2021, with reports indicating that the device had a detachable display with two built-in cameras for taking pictures and videos to share on Facebook, Instagram, and WhatsApp.

Early reports suggested Meta intended for the device to work using a cellular connection without the need for a tethered smartphone, and to run a version of Google's Android software. Meta also planned to work with other companies to create accessories that would allow the detachable display to be attached on backpacks and similar items.

In addition to the demise of its smartwatch project, Meta's internal reorganization will also bring an end to all Portal development, reports Reuters. First launched in 2018, Portal was a brand of smart display featuring video calling capabilities using exclusively Meta-owned services like WhatsApp and Facebook.

Despite the release of several versions, Portal never really took off as a consumer device, while Meta's attempts to promote it in the enterprise market also failed. The company plans to continue selling smart displays under the Portal brand until the end of the year while supplies last.

The structural changes to Meta come shortly after the company laid off 11,000 people, or about 13% of its global workforce. Announcing the move in a note, CEO Mark Zuckerberg said the layoffs were the combined result of his own poor decisions, macroeconomic downturn, increased competition, and ads signal loss, all of which resulted in lower-than-expected revenue.

vtuberalpha
One failure after the other. Truly exquisite business.
Score: 41 Votes (Like | Disagree)

JanoschR
Of course they cancelled it because they are really bad at these things. Besides that, they need all hands on deck to fail with the meta verse stuff.
Score: 33 Votes (Like | Disagree)

ian87w
Wait, Zuck said he made poor decisions, thus other people should be laid off. I see.
Score: 23 Votes (Like | Disagree)

chucker23n1
To be fair, for anyone to launch a smartwatch right now has got to be rough. Apple Watch is already entrenched in the market, and Google only got into the risk because they already owned wearOS and Fitbit.

Add to that that a lot fewer people trust Meta now…
Score: 18 Votes (Like | Disagree)

Robert.Walter
“Zuckerberg said the layoffs were the combined result of his own poor decisions, macroeconomic downturn, increased competition, and ads signal loss, all of which resulted in lower-than-expected revenue…”

But mostly his own bad decisions.

Given how Zuck isn’t very good at scalability and sustainability of anything original, and Google is more or less the place where acquisitions go to die, I have new found respect for Apple which not only successfully scales new ideas, but successfully integrates it’s acquisitions.
Score: 18 Votes (Like | Disagree)

JanoschR
I feel like the headline could be "Titanic Cancels Desert Course" ...yeah, guess why ?
Score: 11 Votes (Like | Disagree)
Read All Comments

Saturday February 4, 2023 10:05 am PST by Eric Slivka
Online retailer TigerDirect has slashed pricing on the M1 iPad Air in several colors, offering the base 64GB configuration for just $313.99 in Purple and Pink. Note: MacRumors is an affiliate partner with TigerDirect. When you click a link and make a purchase, we may receive a small payment, which helps us keep the site running. That's a savings of 48% compared to Apple's normal $599.00...
Read Full Article • 598 comments

Sunday February 5, 2023 6:06 am PST by Hartley Charlton
A new version of the Mac Studio with the "M2 Ultra" chip is unlikely to arrive in the near future, according to Bloomberg's Mark Gurman. In the latest edition of his "Power On" newsletter, Gurman explained that since the upcoming Apple silicon Mac Pro is "very similar in functionality to the Mac Studio," Apple may wait until the release of M3- or M4-series chips to update the machine, or...
Read Full Article • 511 comments

Tuesday February 7, 2023 5:38 am PST by Tim Hardwick
Apple has reportedly considered releasing a new top-of-the-line iPhone alongside future Pro and Pro Max models, tentatively referred to as "iPhone Ultra," and one designer has taken it upon himself to envision what such a device could potentially look like. German industrial designer Jonas Daehnert came up with this impressive-looking concept (pictured) by marrying design elements of the...
Read Full Article • 154 comments