As noted by 9to5Mac, iOS 16.1.1 and the iOS 16.2 beta add a new "Everyone for 10 Minutes" option for AirDrop in China, limiting the amount of time that iPhone users can wirelessly receive files from strangers. The setting was reportedly added after protesters in the country used AirDrop to spread anti-government material. 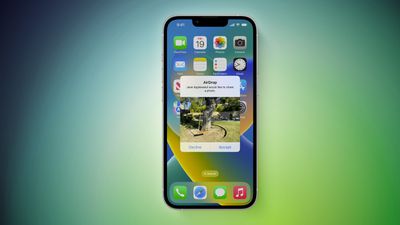 AirDrop normally has three options, including "Receiving Off," "Contacts Only," and "Everyone." When the "Everyone" option is selected, any other iPhone user within close proximity can attempt to send you a file over AirDrop, resulting in a pop-up on the screen with an option to accept or deny the file transfer, with no time limit. In China, Apple has replaced the "Everyone" option with "Everyone for 10 Minutes," which has a 10-minute limit. After this time elapses, AirDrop automatically switches to the "Contacts Only" setting.

Screenshot Credit: Mark Gurman
Apple told Bloomberg's Mark Gurman that it plans to roll out the new AirDrop setting globally in the coming year in an effort to reduce unwanted file sharing. Since the feature launched in 2011, some iPhone users have received inappropriate photos or been pranked by strangers via AirDrop, especially in crowded areas like shopping malls and airplanes.

It's unclear exactly when the setting will be made available in additional countries, or if Apple will allow users to customize the time limit in the future.

Wish anyone else besides China could get this kind of response out of Apple.
Score: 64 Votes (Like | Disagree)

Skyscraperfan
Seems it has nothing to do with fighting spam, but with fighting the anti-government protests. Otherwise it would be available in all countries.
Score: 22 Votes (Like | Disagree)

now i see it
If “Contacts Only” actually worked then nobody would be using “Everyone”
Score: 20 Votes (Like | Disagree)

WilliApple
I hope they keep everyone, and make the 10 minutes a slider for custom time.
Score: 18 Votes (Like | Disagree)

madmin
Planned for years, any resemblance to actual events is purely coincidental ;)
Score: 18 Votes (Like | Disagree)

willyx
It is shameful that Apple is removing a feature that enhances freedom of speech and manifestations in China
Score: 12 Votes (Like | Disagree)
Read All Comments

Sunday February 5, 2023 6:06 am PST by Hartley Charlton
A new version of the Mac Studio with the "M2 Ultra" chip is unlikely to arrive in the near future, according to Bloomberg's Mark Gurman. In the latest edition of his "Power On" newsletter, Gurman explained that since the upcoming Apple silicon Mac Pro is "very similar in functionality to the Mac Studio," Apple may wait until the release of M3- or M4-series chips to update the machine, or...
Read Full Article • 494 comments