Apple's efforts to replace its former design chief Jony Ive have been hindered by increased turnover within the company's product design team over the past few years, according to Bloomberg's Mark Gurman. The report claims that Apple has lost the majority of senior designers who worked under Ive, with many of them jumping ship to his new design firm LoveFrom, which he started after leaving Apple in 2019. 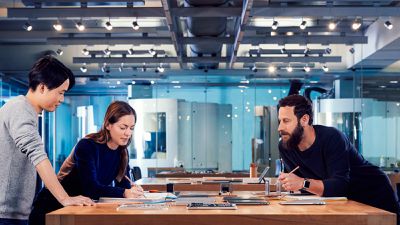 At least 15 senior Apple designers have left the company since Ive moved to a part-time role in 2015, whereas turnover was rare between 2000 and 2015, according to the report. Only a "small handful" of senior designers from the Ive era are said to remain.

Last month, Apple confirmed that its vice president of industrial design Evans Hankey plans to leave the company next year, although the report claims that she currently has no plans to join LoveFrom. Hankey has served as Apple's de-facto design chief since Ive's departure, reporting to Apple's operations chief Jeff Williams.

Even before Ive left, the report claims that Apple's operations department had started to gain more influence over the design team, resulting in an increased "focus on costs" rather than "purely on look and features."

"The strength of the team was that we were a nucleus bound together by the incredible environment that there was and the things we could do in a fairly unconventional way for a large company," a longtime Apple designer told Bloomberg, on condition of anonymity. "It was a special team. It wasn't easy after Steve passed — things started to become a lot more complicated. There were more pressures and outside distractions."

The report goes on to examine potential successors to lead Apple's design team, ranging from veteran industrial designer Richard Howarth to software design chief Alan Dye to an outside hire. Apple said Hankey plans to stay on during the transition.

"Apple's design team brings together expert creatives from around the world and across many disciplines to imagine products that are undeniably Apple," an Apple spokesperson said last month, in response to Hankey's planned departure. "The senior design team has strong leaders with decades of experience. Evans plans to stay on as we work through the transition, and we'd like to thank her for her leadership and contributions."

Spock
Focus to keep costs down for Apple, not the users. Have to maximize profit over innovation, just like Apple in the 1990s
Score: 80 Votes (Like | Disagree)

andrewxgx
lemme tell you something about companies: the demise starts when they prioritize providing value to the shareholders rather than customers
thanks for attending my ted talk
Score: 66 Votes (Like | Disagree)

ThisBougieLife
Meh. There’s pros and cons to this. “Thinness at all costs” was not a good design philosophy. That said, the iPhone just keeps getting bigger and clunkier every year and now we have a useless plastic spacer inside. I’d like to see some middle ground between design vs. practical focus.
Score: 41 Votes (Like | Disagree)

PlayUltimate
Not good. Design should always come first. The accountants can come in after the fact and influence the design.
Score: 39 Votes (Like | Disagree)

tonywalker23
Compare that with page 350 of Walter Isaacson's Steve Jobs where the iMac G3 outer translucent design cost triple what other computers cost at the time… and Steve allowed the design without even discussing the cost of it. Long before there were trillions in the bank.
Score: 38 Votes (Like | Disagree)

masterleep
Mac hardware has been getting much better to use over the past several years, so I'm not sure the Ive team was all that fantastic for people who need to use things, as opposed to look at them.
Score: 35 Votes (Like | Disagree)
Read All Comments