Early Black Friday Deals: Save Up to 60% on Apple Accessories From Twelve South, Satechi, and Mophie

Although we're still a few weeks away from Black Friday, multiple accessory makers have kicked off early Black Friday events with notable markdowns on charging, travel, and protection accessories for Apple products. This includes Satechi, Twelve South, and ZAGG, offering up to 60 percent off accessories during these sales.

Starting with Satechi, you can get 40 percent off a selection of charging accessories with the code DEALS used at checkout. Satechi's early Black Friday event is focusing on USB-C chargers, USB-C hubs, wireless chargers, MagSafe-compatible chargers, and more. 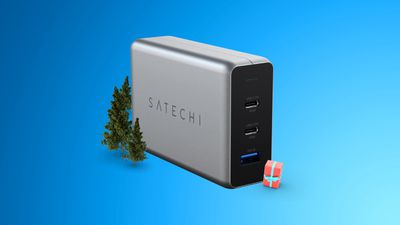 Twelve South is giving its customers a sneak peek at its upcoming Black Friday sale with up to 60 percent off travel gear. This includes accessories like the Curve Flex for MacBook Pro, PlugBug Duo for MacBook Pro, and AirFly for AirPods.

UP TO 60% OFF
Twelve South's Black Friday Sneak Peek

At ZAGG, you can get 30 percent off your order when purchasing two or more products at the same time. This excludes already-discounted items, and you won't need a coupon code to see the discount during this event.

The sale covers accessories offered from Mophie, Gear4, ZAGG, and Invisible Shield, so it's a good opportunity to stock up on holiday gifts and stocking stuffers for iPhone owners. Be sure to browse across all of the ZAGG brands to find the best accessories before the sale ends.

We're keeping track of all of the season's best Apple-related deals in our Black Friday roundup, so be sure to check back throughout the month for an updated list of all the most notable discounts you'll find for Black Friday 2022.

Ryan H
People are starting to see through these "Deals" now, can get good prices all year around.
Score: 7 Votes (Like | Disagree)

macduke
Anyone feel like all the sales have been moved up earlier this year? It’s almost like companies are worried about an impending economic calamity that has yet to manifest. Lots of FUD out there.
Score: 3 Votes (Like | Disagree)

Does that even count as a sale? I can save more by buying out of state.
Score: 2 Votes (Like | Disagree)

Anyone feel like all the sales have been moved up earlier this year? It’s almost like companies are worried about an impending economic calamity that has yet to manifest. Lots of FUD out there.

AFAIK, Amazon started it for this year by doing their Prime event sooner. And IIRC, they'll be doing it multiple times per year? Do agree when somebody basically called it a glorified yard sale to clear out excess stock in their warehouses. Even their normal Prime events were slim pickings.
Score: 1 Votes (Like | Disagree)
Read All Comments

Tuesday January 24, 2023 1:11 pm PST by Joe Rossignol
While the new Mac mini with the M2 chip has a lower $599 starting price, the base model with 256GB of storage has slower SSD read and write speeds compared to the previous-generation model with the M1 chip and 256GB of storage. A teardown of the new Mac mini shared by YouTube channel Brandon Geekabit reveals that the 256GB model is equipped with only a single 256GB storage chip, while the...
Read Full Article • 626 comments