The Connectivity Standards Alliance and its members that include Apple, Google, Amazon, Samsung, and other smart home manufacturers, today announced the official launch of the Matter 1.0 smart home accessory standard. 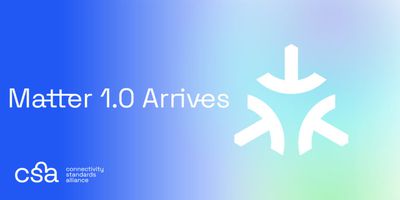 Companies that have agreed to support Matter now have all of the resources that they need to begin implementing Matter into their platforms, so we could see Apple integrating Matter into HomeKit very soon. In fact, iOS 16.1 is already laying the groundwork for Matter, so Matter could be announced with the launch of the update.

"What started as a mission to unravel the complexities of connectivity has resulted in Matter, a single, global IP-based protocol that will fundamentally change the IoT," said Tobin Richardson, President and CEO of the Connectivity Standards Alliance. "This release is the first step on a journey our community and the industry are taking to make the IoT more simple, secure, and valuable no matter who you are or where you live. With global support from companies large and small, today's Matter 1.0 release is more than a milestone for our organization and our members; it is a celebration of what is possible."

With the Matter 1.0 launch, authorized test labs are now available for product certification, tools are available, and the open-source reference design SDK is complete. Alliance members with devices that have already been deployed and with plans to update their products with Matter support can do so as soon as their products are certified.

Matter is an internet of things standard that is designed to improve interoperability of smart devices between brands, so ‌HomeKit‌ devices can work with other smart home devices from Google, Amazon, and others. Matter works over Wi-Fi and Thread, with Wi-Fi allowing smart home devices to communicate with the cloud and Thread offering an energy efficient and reliable mesh network in the home.

TonyC28
I want to be excited. I really do. But I have zero confidence that current hardware made by different manufacturers will be updated with software to allow interoperability, even if the necessary hardware is already there. They are going to hope that we buy new hardware and probably charge even more for it.
Score: 21 Votes (Like | Disagree)

That is often the case, this is hopefully the start of the devices actually becoming smart. I am glad that Apple is part of this standard, they don't always like to play nice with standards.
Score: 10 Votes (Like | Disagree)

George Dawes
In my experience most of this smart stuff isn't that smart at all
Score: 9 Votes (Like | Disagree)

HomeKit just sits useless on my device and has been for years since none of the devices and the ecosystem I have now is compatible with.

Almost every device I have works in homebridge
Score: 9 Votes (Like | Disagree)

heystu
So...does this mean I can control my Nest thermostat and cameras with the Home app? Or will it apply only to new devices? If the latter, then Matter don't matter...
Score: 8 Votes (Like | Disagree)

Remember Thread? This is just another stupid standard that won't get implemented well IMO

Thread is part of the Matter specification.
Score: 8 Votes (Like | Disagree)
Read All Comments