Anker has one-upped Apple by launching new Soundcore Liberty 4 earbuds with in-ear heart rate sensors – a feature that was rumored to be coming to the AirPods Pro 2 but ultimately never made the cut. 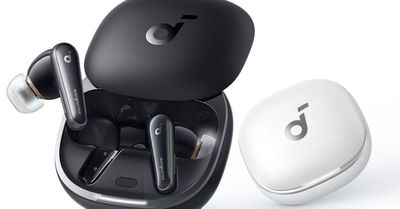 Anker's new earbuds feature a stemmed design reminiscent of Apple's AirPods, while the right-hand earbud includes a special sensor that can monitor your heart rate continuously or just when you're working out. The HR data is linked to Anker's Wellness app, which also features tracking options for guided, freestyle, and custom exercise routines.

The Liberty 4 also come with spatial audio support, active noise cancelation, a customizable equalizer, and support for AAC, LDAC, and SBC codecs, but not aptX. The earbuds also include support for multiple connection switching.

Battery life is stated at up to nine hours on a single charge, but this decreases to seven hours with noise canceling enabled, six hours in LDAC mode and no noise cancelation, and five hours with spatial audio on.

The wireless charging case has a USB-C port for wired charging, provides up to 28 hours of battery life, and it can fast charge the earbuds in 15 minutes to provide three hours of playback, or fully charge them in an hour.

Anker's Soundcore Liberty 4 earbuds cost $149.99 and come in either black or white, with the latter available from today on Soundcore.com. The black earbuds are also coming to Amazon on October 10, while the white set it due to go on sale on October 7 on Soundcore's website and October 17 on Amazon.

As for Apple, it's not clear whether heart rate tracking was a feature the company pulled from its second-generation ‌AirPods Pro‌ or if it's something Apple is developing for future AirPods models. Apple has been rumored to be developing health-monitoring functions for AirPods for some time, with even Apple executives hinting at the possibility.

According to documents seen by The Wall Street Journal, prototypes of AirPods with temperature sensors for monitoring a wearer's core body temperature from inside the ear are being developed by Apple, but which model they are for and when they will make an appearance, if ever, remains unknown.

lazyrighteye
I love this community… So loyal. So protective.

If that feature were on AirPods it would be praised. That it’s on a competitor’s product and it’s 1/2 baked and/or written off. We amaze me. ?
Score: 53 Votes (Like | Disagree)

I love this community… So loyal. So protective.

If that feature were on AirPods it would be praised. That it’s on a competitor’s product and it’s 1/2 baked and/or written off. We amaze me. ?

Then you buy them and enjoy them
Score: 16 Votes (Like | Disagree)

DMG35
They aren’t one upping the AirPods with a feature that is sure to be half baked.
Score: 13 Votes (Like | Disagree)

Then you buy them and enjoy them

Their product is of zero interest. Thanks.
Score: 10 Votes (Like | Disagree)

coolbreeze2
I think some of us are missing the point. These buds do everything AirPods do and only cost $149. For people who don't have AirPod money and don't care about not showing the Apple brand, these could be the answer. I have the first-generation AirPods Pro and would consider the Anker buds because I just purchased the Watch Ultra and money is tight.
Score: 9 Votes (Like | Disagree)

I love this community… So loyal. So protective.

If that feature were on AirPods it would be praised. That it’s on a competitor’s product and it’s 1/2 baked and/or written off. We amaze me. ?

It would be praised on Airpods because it would work.
Score: 8 Votes (Like | Disagree)
Read All Comments

Thursday December 1, 2022 11:12 am PST by Juli Clover
Nothing, known for a range of Android-based lower-cost devices, recently came out with a new set of $99 "Ear Stick" earbuds. We picked up some of the new earbuds and thought we'd check them out to see how they measure up to Apple's AirPods. Subscribe to the MacRumors YouTube channel for more videos. Stylized as the Nothing Ear (stick), the earbuds from Nothing have a rather unique design. You ...
Read Full Article • 27 comments

Tuesday June 7, 2022 5:00 am PDT by Juli Clover
Belkin today announced the launch of its new high-end Soundform earbuds that are equipped with Hybrid Active Noise Cancellation and integration with Apple's Find My app. First announced at CES 2022, the Soundform Immerse Noise Cancelling Earbuds are Belkin's second set of Find My-compatible earbuds, following the Freedom True Wireless Earbuds that came out in 2021. Priced at $180, the...
Read Full Article • 15 comments

Monday October 3, 2022 8:05 am PDT by Hartley Charlton
The longer battery life of second-generation AirPods Pro is partly achieved by use of physically bigger batteries, regulatory filings show. Compared to the first-generation AirPods Pro, Apple says that the second-generation model features an additional 1.5 hours of battery life with Active Noise Cancellation enabled for a total of six hours. Listings on the 3C database spotted by MySmartPrice...
Read Full Article • 50 comments

Wednesday September 7, 2022 10:45 am PDT by Joe Rossignol
Apple today announced the second-generation AirPods Pro with an upgraded H2 chip that provides up to twice as much active noise cancellation and more. The new AirPods Pro look similar to the original. A new Touch Control feature on the stem allows users to adjust the volume with a swipe up or down, while the silicone ear tips are now available in a new XS size alongside small, medium, and...
Read Full Article • 164 comments

Tuesday November 8, 2022 9:20 am PST by Juli Clover
Apple's Beats by Dre brand today announced the upcoming launch of a new set of limited edition Powerbeats Pro earbuds that have been designed in collaboration with fashion designer Melody Ehsani. Available in two split colorways that include pink/red and blue/yellow, the earbuds both have a little eye logo and a saying: "If you can read this you're too close." The Powerbeats Pro are set...
Read Full Article • 50 comments