Today marks the fifth anniversary of Apple introducing the iPhone X during its first-ever media event at Steve Jobs Theater. 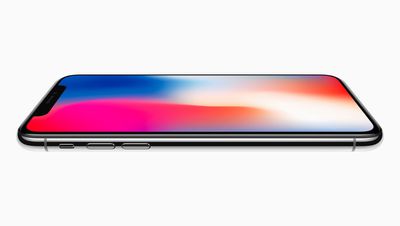 iPhone X introduced an all-new design that replaced Touch ID and the Home button with Face ID and swipe-based navigation. It was the first iPhone with an OLED display, a notch, dramatically thinner bezels around the display, a polished stainless steel frame, and animated emoji known as Animoji. Alongside the iPhone 8, the iPhone X also ushered in wireless charging support and the Neural Engine for machine learning.

"For more than a decade, our intention has been to create an iPhone that is all display," said Apple's former design chief Jony Ive, in a September 2017 press release. "The iPhone X is the realization of that vision."

Apple CEO Tim Cook teased the introduction of the iPhone X as "one more thing" before Schiller took the stage to discuss the device's new features.


As the first event at Steve Jobs Theater, Apple began its presentation with a touching tribute to Steve Jobs, who passed away in 2011.
Apple said the iPhone X represented "the beginning of the next ten years for iPhone." While the notch has been replaced with a new pill-shaped Dynamic Island cutout on the iPhone 14 Pro models, the overall design of the iPhone X and Face ID live on.
[ 130 comments ]

HeavenDynamic
The best iPhone design ever and no doubt the one I was the most hyped for.
Score: 22 Votes (Like | Disagree)

I7guy
Game changer. Face ID was a pivotal technology and set a high bar for form and function.
Score: 16 Votes (Like | Disagree)

MrSegundus
I miss the rounded edges of the iPhone X. Sigh.
Score: 15 Votes (Like | Disagree)

Andy-V
Looking forward to a return of the rounded edges at some point in the next couple of years. Felt better in the hand.
Score: 11 Votes (Like | Disagree)

phill85
Ahead of its time... one of my favorite iPhones ever! Still remember just having received it, and then taking my first trip to Europe and photographing everything possible with it. Still some of my favorite photos in my camera roll!
Score: 10 Votes (Like | Disagree)

psxp
Was this the last time we had a " ...one more thing" ?
Score: 9 Votes (Like | Disagree)
Read All Comments

Tuesday July 19, 2022 11:53 am PDT by Joe Rossignol
Launched in 2017, the iPhone X was a major evolution of the iPhone. The device replaced the Home button and Touch ID with swipe-based navigation and Face ID, while introducing new features like an OLED display, Animoji, wireless charging, and more. Subscribe to the MacRumors YouTube channel for more videos. Even five years later, the iPhone X is still a capable smartphone. If you've been...
Read Full Article • 86 comments

A Walk Down Memory Lane: Evolution of the iPhone Display Bezels and Notch

Tuesday September 13, 2022 8:08 am PDT by Sami Fathi
This week marks the fifth anniversary of Apple revealing the iPhone X, one of the biggest redesigns in the iPhone's history. Among other innovations, the iPhone X introduced the notch to the iPhone with Face ID and a design language that has persisted through the last several years. In memory of the notch turning five years old this week, we thought we'd look back at the history of the...
Read Full Article • 132 comments

Wednesday October 5, 2022 3:00 am PDT by Joe Rossignol
Today marks the 11th anniversary of Steve Jobs passing away at the age of 56, one day after Apple introduced the iPhone 4S and Siri. Laurene Powell Jobs, Tim Cook, and Jony Ive recently discussed Jobs' legacy during a sit-down panel with journalist Kara Swisher. During the discussion, Powell Jobs shared a new website called The Steve Jobs Archive that contains a collection of quotes, videos, ...
Read Full Article • 129 comments

Wednesday April 6, 2022 5:38 am PDT by Sami Fathi
Apple has expanded its program that allows customers to get their Face ID system repaired without replacing the entire device to the iPhone X, according to a memo seen by MacRumors. The iPhone X was initially excluded from the list for this program. Apple launched the program last month, giving Apple Stores and authorized repair centers access to parts for the TrueDepth camera system and...
Read Full Article • 48 comments

Friday September 16, 2022 8:03 am PDT by Sami Fathi
Earlier this month, Apple's CEO Tim Cook, former Apple design chief Jony Ive, and Emerson Collective founder Laurene Powell Jobs participated in a panel at Kara Swisher's final Code Conference, where they discussed Steve Jobs and a wide range of other topics. For the first time since that conference, the full video of the hour-plus-long discussion has been shared on YouTube. During the...
Read Full Article • 50 comments

Sunday October 2, 2022 10:48 am PDT by Sami Fathi
In a new interview, Apple's senior vice president of software engineering, Craig Federighi, and Apple's vice president of human interface design, Alan Dye, sat down to discuss the thinking behind the iPhone 14 Pro's Dynamic Island and how it was developed. During the interview with the Japanese magazine Axis, Federighi, who oversees the development of iOS, said Dynamic Island represents the...
Read Full Article • 195 comments

Monday August 29, 2022 8:19 am PDT by Sami Fathi
For the first time since 2019, Apple will host an in-person event to launch its newest iPhones on Wednesday, September 7, at the Steve Jobs Theater at Apple Park. While the event is expected to remain primarily digital with an in-person component, it marks the first time in three years that Apple is holding an event in the Steve Jobs Theater and the first in-person iPhone launch since the iPhone...
Read Full Article • 29 comments

Tuesday August 23, 2022 10:50 am PDT by Joe Rossignol
Apple CEO Tim Cook, former Apple design chief Jony Ive, and Emerson Collective founder Laurene Powell Jobs will be among the speakers at Vox Media's Code 2022 conference at The Beverly Hilton hotel in Los Angeles. The in-person event is set to take place on September 6-8, but it's unclear exactly when Cook, Ive, and Powell Jobs will be speaking. The discussions will be hosted by veteran...
Read Full Article • 56 comments