The all-new Apple Watch Ultra unveiled today is available to pre-order starting today in the U.S., Canada, Australia, France, Germany, India, Japan, the U.K., and more than 40 other countries and regions around the world, with pricing set at $799. Apple Watch Ultra will launch in stores and begin arriving to customers on September 23. 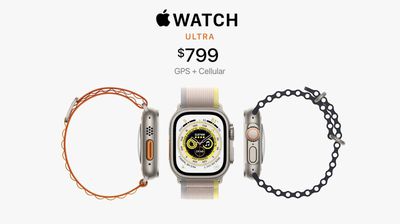 Inspired by the "most extreme activities," the Apple Watch Ultra features a durable design with a 49mm titanium case, a larger display with a flat sapphire crystal cover, new bands designed for the outdoors, water resistance up to a depth of 100 meters, a customizable bright orange "Action" button on the left side of the case, and more.

A new Wayfinder watch face designed for the Apple Watch Ultra's larger display includes a compass and space for up to eight complications. There are also new workout views, such as Segments, Splits, and Elevation, that provide important metrics at a glance.

"Inspired by explorers and athletes from around the world, we created an entirely new category of Apple Watch designed for new and extreme environments — it's the most rugged and capable Apple Watch yet," said Apple's operations chief Jeff Williams, who oversees the Apple Watch team. "Apple Watch Ultra is a versatile tool that empowers users to push their boundaries with adventure, endurance, and exploration."


Apple Watch Ultra is advertised as having up to 36 hours of battery life per charge during normal usage, and a new low-power setting with reduced frequency of GPS and heart rate readings that extends battery life to up to 60 hours per charge will be available in a future watchOS 9 software update later this year, according to Apple.

For more details about the Apple Watch Ultra, read our announcement coverage.

Spaceboi Scaphandre
I'm surprised it's $800. I thought it would be over $1000 with how durable it is and the fact it can be used as a proper scuba diving watch.

This is my current dive watch. It’s $1500 and it probably will sit on the sidelines.

ebika
As an avid scuba diver, this is awesome. I need it.
Score: 7 Votes (Like | Disagree)

Mr. Dee
I thought initially this thing was gonna be 1,299. Even though I don’t do a single thing is designed for, I will be upgrading to it next year.
Score: 6 Votes (Like | Disagree)

Steve686
My God they just turned the dive industry on its head. They didn't mention a free dive mode, but I assume they would add one if its not there.

My dive computer alone cost $1500. Of course this is with a tank sensor which ups the price about $350. ScubaPro, Garmin, and Oceanic executives have to be stunned at the $799 price for an everyday wear dive computer that feature wise, especially with cellular connectivity, decimates any product they offer.

If Apple wants to rule the recreational dive waters, they could develop or license a tank sensor to integrate air consumption.

Wednesday September 7, 2022 4:55 pm PDT by Joe Rossignol
The all-new Apple Watch Ultra is available to pre-order starting today in the U.S. and more than 40 other countries, with pricing set at $799. The high-end Apple Watch will launch in stores and begin arriving to customers on September 23, but some configurations are already facing lengthy shipping delays as of late Wednesday. A quick spot check of Apple's online store in the U.S. reveals...
Read Full Article • 64 comments

Monday September 26, 2022 11:02 am PDT by Joe Rossignol
iFixit today shared an Apple Watch Ultra teardown post and video, providing a closer look at the watch's internal design and components. While the Apple Watch Ultra has four exposed pentalobe screws on the back case for quick access to the inside of the watch, iFixit said the device remains challenging to repair. For example, after removing the back case, iFixit said a gasket contributing to ...
Read Full Article • 108 comments

Tuesday October 4, 2022 3:30 am PDT by Hartley Charlton
The European Parliament today voted overwhelmingly in favor of enforcing USB-C as a common charging port across a wide range of consumer electronic devices, including the iPhone and AirPods, by the end of 2024. The proposal, known as a directive, forces all consumer electronics manufacturers who sell their products in Europe to ensure that a wide range of devices feature a USB-C port. This...
Read Full Article • 305 comments