The large pill-shaped combination cutout that's planned for the iPhone 14 Pro models will display privacy indicators for the microphone and the camera, according to a source that shared details on the MacRumors forums. 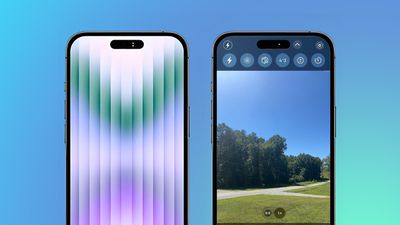 Apple is planning to replace the notch on the ‌iPhone 14 Pro‌ models with two separate pill-shaped and hole-punch cutouts that will house the TrueDepth camera system hardware for Face ID, but as we learned today, the cutouts will be combined together using software, appearing as a single long, pill-shaped cutout when the iPhone is in use.

The space between the two cutouts will apparently be used to show the orange and green dots that indicate when the camera or the microphone has been activated by an app. At the current time, these indicators are shown to the right of the notch when the hardware is actively engaged, but putting them front and center on the ‌iPhone‌'s display will make it more apparent when the camera and the microphone are in use.

Having the green dot front and center when the camera is active will make the experience of using an ‌iPhone‌ similar to using a Mac. On a Mac, when the webcam is in use, there is a green indicator light that cannot be disabled, with the light located right next to the camera.

Apple will apparently let users tap on the green and orange dots to receive more information about what apps are using the ‌iPhone‌'s hardware. Right now, that data is provided in Control Center, with Apple listing apps that have recently used the camera, microphone, and location.

The forums source claims that Apple will also redesign the Camera app, moving most of the controls to the top of the display to provide users with a larger view of the camera preview, but this change is "still not entirely locked in."

When the privacy indicators are not engaged, the space between the two cutouts on the ‌iPhone 14 Pro‌ models will be blacked out so that it appears as a single cutout. iPhone 14 models will use a standard notch and will therefore likely continue to feature the same hardware indicators that are available on the iPhone 13 models.

profets
Now that is a smart use of that space.

But damn, these fun little tidbits I'd like to be surprised with at the keynote or hands on after. My fault for being on MR.
Score: 36 Votes (Like | Disagree)

TheYayAreaLiving ?
Woah! these indicators look so cool. I hope Apple makes it bright enough that we can see it with the naked eye. It's these little details... that is why I love Apple and an iPhone.
Score: 30 Votes (Like | Disagree)

bassexpander
Good grief. By launch date, it'll be like this, and we’ll call it Apple’s Natch:

zakarhino
Another MacRumors used called it on one of the previous pill threads. Makes a lot of sense. Now we just have to see how the pill will shape shift for additional information.

EDIT: Woah, looks like 9to5's source actually posted on MacRumors using a burner account several hours before any news sites picked up on it:

Thursday September 8, 2022 8:28 am PDT by Joe Rossignol
Since iOS 14, iPhones have displayed a green dot on the right side of the notch when the camera is actively being used by an app. On the iPhone 14 Pro models, this privacy indicator is now shown within the new pill-shaped Dynamic Island cutout. The relocated camera indicator can be seen in Apple's video introducing the iPhone 14 Pro, when the built-in Camera app is opened, and there is also...
Read Full Article • 53 comments

Privacy Indicators on iPhone 14 Pro's Pill-Shaped Cutout Will Be Brighter Than Rest of Display, Similar to Mac Camera LED

Thursday September 1, 2022 9:27 am PDT by Juli Clover
Last minute rumors have suggested that the two planned cutouts on the iPhone 14 Pro will be displayed as a single large pill-shaped cutout, with Apple also using that space for the green and orange camera and microphone privacy indicators. The privacy indicator information comes from a source on the MacRumors forums who appears to have inside knowledge on what the display will look like. The ...
Read Full Article • 68 comments

Wednesday August 31, 2022 1:34 pm PDT by Juli Clover
The iPhone 14 Pro models have long been rumored to include a notch replacement that consists of a pill-shaped cutout and a separate hole-punch cutout for the Face ID system, but pre-event rumors this morning suggested that the cutouts will be combined into one wider cutout using software. Bloomberg's Mark Gurman has now confirmed that this is true, and he says that the two separate cutouts...
Read Full Article • 106 comments