On August 15, 1998, the first iMac, introduced by Steve Jobs just a few months prior, officially went on sale, marking a turning point for Apple and the first true consumer desktop from the company.


"The excitement of the internet. The simplicity of Macintosh" is how Jobs described the first ‌iMac‌ during the now iconic keynote on May 6, 1998. During the presentation, Jobs compared it to other desktop computers on the market. According to Jobs, those computers were slow, featured smaller 13 to 14-inch displays, probably didn't have any networking capabilities, and were ugly. The original ‌iMac‌ hoped to target each weak point with faster performance, a better-looking design, and updated I/O ports. 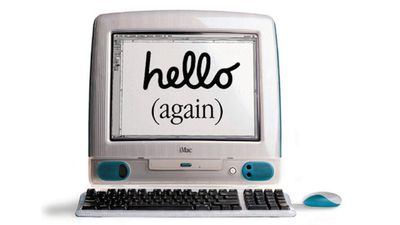 "We decided to make this thing fast," Jobs said, touting the at the time powerful G3/233 processor. The first ‌iMac‌ featured a 15-inch display that was 1024x768, 32MB of standard memory, 4GB of disk storage, a 24x CD-ROM drive, a 100Mb Ethernet port, a 33.6Kb modem, and a 4MB IrDA. The original ‌iMac‌ had stereo SRS sound, two 12MB USB ports, and a keyboard and mouse for I/O and peripherals.

Iconically, it featured a translucent design that allowed people to see inside the machine. "The back of this thing looks better than the front of the other guys, by the way," Jobs jokingly said about its design compared to the competitors on the market. On the front of the ‌iMac‌, beneath the display, it featured stereo surround speakers, infrared, a CD-ROM, and a headphone jack.

The original ‌iMac‌ retailed for $1,299, and since its introduction 24 years ago, the ‌iMac‌ has transformed and evolved a great deal. Apple's latest ‌iMac‌, the 24-inch ‌iMac‌ with M1, is similar to the original ‌iMac‌ in that it's offered in many colors. The ‌iMac‌'s design has continued to radically change, becoming thinner, slimmer, and more powerful over the years.

DMG35
I still have one, its an aquarium now though.. Need a new fish for it….

iDarth_Betar
Iconic it is. Look at him in a suit!

Lioness~
Remember these days and Steve with much ❤️
Felt like you were on a very special journey that few experienced with that amazing guy.
Score: 12 Votes (Like | Disagree)

BenTrovato
Loved how exciting the late 90's were for computing across the board
Score: 6 Votes (Like | Disagree)

NightFlight
I had one of the first ones I could get my hands on. Bondi blue, it looked exactly like the first picture and I absolutely loved it.

kalsta
Hear the audience laugh when Steve says that Apple staff have great stock options! Oh the irony with the benefit of hindsight.
Score: 5 Votes (Like | Disagree)
Read All Comments