Backbone today announced the release of a new PlayStation Edition of its popular game controller for the iPhone. There is also a new dedicated section inside the Backbone app for iOS with new releases and updates from PlayStation. 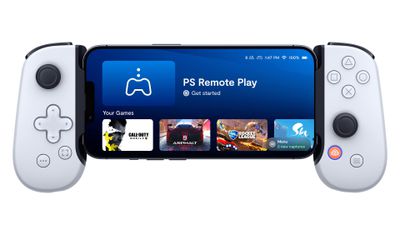 The new controller was created in partnership with Sony and inspired by the design of the PS5's wireless DualSense controller, including transparent button faces. The controller is priced at $99.99 in the United States and is available to order starting today in a white color matching the PS5 console, in addition to a black option.

The controller connects to and is charged by the iPhone via Lightning, and there is an additional Lightning connector for pass-through charging. The controller also has a 3.5mm headphone jack, a button for capturing screenshots and game clips, and a button to open the Backbone app. The controller can be collapsed/folded when not being used.

Customers who purchase the Backbone One PlayStation Edition controller can receive some perks, such as a free one-month subscription to Apple Arcade if they have not already subscribed to the service, along with three months of Discord Nitro for free and more.

iPhones have already supported PS5 DualSense and Xbox Series X/S controllers via Bluetooth since the release of iOS 14.5 last year.

techfreak23
Inspired by the PS5 controller, but has the stick layout of the Xbox...?
Score: 10 Votes (Like | Disagree)

Villarrealadrian
A bit pricey for a controller but oh well everything in this blog is pricey so what the hell…
Score: 7 Votes (Like | Disagree)

macsorcery
if only we had emulators in the AppStore.. until then, I will just keep toting this:

icanhazmac
Nice idea but I have thrown too many controllers against the wall in frustration for me to ever consider this.
Score: 5 Votes (Like | Disagree)
Read All Comments

Monday January 30, 2023 12:55 am PST by Tim Hardwick
Apple will launch a foldable iPad with a carbon fiber kickstand sometime next year, according to analyst Ming-Chi Kuo. Subscribe to the MacRumors YouTube channel for more videos. In a series of tweets, Kuo said he expects an "all-new design foldable iPad" to be the next big product launch in the iPad lineup, with no other major iPad releases in the next nine to 12 months. The analyst said he...
Read Full Article • 207 comments