Apple today shared a preview of its new Brompton Road store in London, which opens to the public this Thursday, July 28 at 4 p.m. local time. 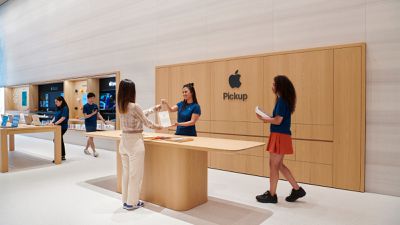 Apple Brompton Road is the first Apple Store in the UK with a dedicated Apple Pickup area for customers to pick up their products ordered on Apple's online store.

Apple has rolled out a dedicated pickup area in a handful of stores since late 2021, including Apple The Mall at Bay Plaza in New York City, Apple The Grove in Los Angeles, Apple Rosenthaler Straße in Berlin, Apple Myeongdong in Seoul, and a few others.

Other design aspects of Apple Brompton Road include floor-to-ceiling windows along the facade, a unique curved timber ceiling, terrazzo flooring, a mirrored ceiling above the Forum area for Today at Apple sessions, a dozen Sicilian ficus trees with seating at the base of each planter, and more. Apple says the store is powered by 100% renewable energy.

Apple Brompton Road is located in London's busy Knightsbridge neighborhood alongside many other flagship retailers, including the department store Harrods. Apple says the store has over 200 employees who collectively speak more than 45 languages.

"We are thrilled to open Apple Brompton Road in London, a city teeming with energy, history, and cultural diversity," said Apple's retail chief Deirdre O'Brien. "The store's focus on creativity gives our incredible team members the perfect space to share their passion and expertise with Londoners and visitors from around the world."

On July 30, four Apple Fitness+ trainers will join Apple's head of fitness technologies Jay Blahnik for an in-store Q&A session at Apple Brompton Road, followed by a three-kilometer walk and five-kilometer run in nearby Hyde Park.

contacos
Did not know that wasn't a thing everywhere.

Generally I wish they would bring (back?) check out counters like every damn store in existence. I don't go a lot but every time I do, I feel like an Idiot trying to find a "Genius" that is free and I can "bother" with taking my money. "Sorry, I can't but someone will be with you shortly. SMILEY FACE".

Same with getting support actually. They tell you to sit down wherever in the store and you hope, they did not forget about you. Last time i was sitting under some random decorative tree at the store, watching "Geniuses" having a chat with one another wondering if they will ever take my case. I don't understand why they do not have a dedicated area where you sit down and a display shows you which Number is next or whatever.
Score: 11 Votes (Like | Disagree)

antiprotest
Finally. But I wish they would bring back counters for everything, rather than making customers hunt down a "genius" and shoving other people away in order to get any help with every little thing. Did the Burberry lady made that mess? I forgot her name.
Score: 7 Votes (Like | Disagree)

BellSystem
Thank god. I am so sick of placing an online order and having to wait 30 minutes for someone to "be right with me".
Score: 6 Votes (Like | Disagree)

What's the point of a "dedicated pick-up" area when you can have your devices delivered right at the doorstep. It's not like they are serving the customers with alcohol. With the dedicated pickup area, I'm sure you still have to wait in line.

Finally. But I wish they would bring back counters for everything, rather than making customers hunt down a "genius" and shoving other people away in order to get any help with every little thing. Did the Burberry lady made that mess? I forgot her name.

Angela Ahrendts. She all but destroyed Apple Retail.
Score: 5 Votes (Like | Disagree)
Read All Comments

Monday July 18, 2022 4:08 am PDT by Tim Hardwick
Apple has announced that its new Apple Brompton Road store in the heart of Knightsbridge, London, will open on July 28. Our newest store on London's iconic Brompton Road, a moment away from Hyde Park, is almost ready to explore. It's a place where your boldest ideas can bloom, and we're here to help them grow.Situated just a few doors down from the world-famous Harrods department store and...
Read Full Article • 41 comments

Tuesday June 14, 2022 2:35 am PDT by Tim Hardwick
Google Maps is gaining a new feature on iOS and Android that estimates the amount of money you'll have to pay in tolls for a chosen route. Before you set off, you'll now see the estimated toll price to your destination in the app. Google says the road information is sourced from local tolling authorities, and includes factors like having a toll pass or not, what day of the week it is, and...
Read Full Article • 33 comments

Thursday July 7, 2022 9:18 am PDT by Juli Clover
Apple today sent out emails with new Apple Pay discounts, offering a series of "Road Trip" themed summer deals from companies like HotelTonight, Wawa, Sonic, and more. The discounts are outlined below. HotelTonight - 10% off a hotel reservation when making a purchase in the app with promo code APPLEPAYHT. Jimmy John's - $2 off a sandwich when ordering ahead with Freaky Fast Rewards...
Read Full Article • 15 comments

Apple's Online Store is Currently Down in Some Countries [Updated]

Sunday July 31, 2022 8:57 pm PDT by Joe Rossignol
Apple's online store is currently down in some countries, including the United States, Canada, Australia, France, Germany, Italy, Spain, the United Kingdom, and more. The downtime is not worldwide, with the store still operational in some other countries. "We're making updates to the Apple Store," the store page says, as usual when there is downtime. Apple advises customers to "check back...
Read Full Article • 110 comments

Tuesday May 24, 2022 5:48 am PDT by Joe Rossignol
Apple today announced that its in-store "Creative Studios" initiative will be expanding to seven additional cities around the world this year, including Nashville, Miami, Berlin, Milan, Taipei, Tokyo, and Sydney. The program will also return for its second year in Chicago, Washington, D.C., New York City, London, Paris, Bangkok, and Beijing. Apple said the initiative is designed to "support...
Read Full Article • 4 comments

Thursday July 28, 2022 5:06 am PDT by Sami Fathi
Apple has once again delayed the opening of its first physical retail store in India, The Economic Times reports. The store was originally planned to open in 2021, but the global health crisis and economic uncertainty forced Apple to delay the opening. Now, Apple has decided to delay the launch until early 2023, with today's report saying the company is aiming for a launch between the...
Read Full Article • 29 comments

Monday July 25, 2022 7:00 am PDT by Joe Rossignol
Apple Store enthusiast and creative extraordinaire Michael Steeber today announced the launch of The Apple Store Time Machine, a new interactive Mac app that lets you "travel back in time" and revisit four iconic Apple Stores on their grand opening days. "The Apple Store Time Machine is a celebration of the places and products that have shaped our lives for more than twenty years," said...
Read Full Article • 99 comments

Saturday June 18, 2022 6:06 pm PDT by Sami Fathi
Apple Store employees in Maryland have made history by voting to officially unionize, becoming the first Apple retail location to do so in the U.S. after efforts by Apple to calm down unionization efforts. As reported by CNBC, employees at the Apple Store in Towson, Maryland voted 65 for and 33 against a call to join the Machinists Union. 110 employees were eligible to vote Wednesday through ...
Read Full Article • 559 comments