Apple's rumored high-end Apple Watch model for extreme sports could cost around $999 – the same starting price as the current iPhone 13 Pro – according to Bloomberg's Mark Gurman. 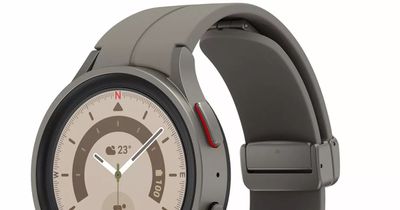 Samsung Watch Pro 5, the likely rival of 'Apple Watch Pro' (Image: 91Mobiles)
Writing in the latest edition of his Power On newsletter, Gurman compares the rumored premium watch to the current 45mm titanium Apple Watch Edition, which starts at $849.


Given that the new high-end Apple Watch will pack in a slightly larger display, new sensors and higher-end materials, I wouldn’t be surprised if it starts closer to $900 to $999, the starting price of an iPhone 13 Pro. We're only a couple months away from finding out exactly where Apple lands.

Gurman compares the Garmin-esque Apple Watch model to what he believes will be its biggest rival, the already-leaked Samsung Watch Pro 5, which is expected to be announced next month. Samsung's "Pro" version will have a slightly larger display and battery than standard models, as well as a titanium case and a more rugged design. However, the most costly version, the 44mm model with LTE, is expected to be around half the price of Apple's rumored watch.

Aimed at athletes, hikers, and others who experience more extreme conditions during exercise, the new tier of Apple Watch will feature LTE, a larger screen, and a metal casing that's better able to stand up to abuse. Gurman offers a few possible names for the new device – Apple Watch Extreme, Apple Watch Max, Apple Watch Explorer Edition – but the journalist speculates that the model will adopt the 'Pro' moniker in line with its other higher price-point products.

The display will measure in at almost two inches diagonally, which is larger than the 1.9-inch diagonal screen size of the current Apple Watch Series 7 and the planned Apple Watch Series 8. It is also expected to include a more shatter-resistant screen and have a larger battery to accommodate longer workout times.

I been an owner of the iphone since the original 2g version and to this date I have never own nor wanted an apple watch. Never understood the whole idea of it. I much prefer a simple Swiss watch than something I need to worry about charging.

You clearly have no clue what features the Apple Watch has
Score: 33 Votes (Like | Disagree)

calstanford
Apple is going insane. I can see the downfall coming.
Score: 16 Votes (Like | Disagree)

DHagan4755
This sucker Better make pancakes for you in the morning for a grand
Score: 15 Votes (Like | Disagree)

sharpimage
I don’t know where this ‘rugged’ requirement is coming from. Extreme sports, endurance, Ironman dont happen in extreme environments. They just need a bigger battery! Apple may just be missing the point with this one.
Score: 15 Votes (Like | Disagree)

boak
Better off buying the base AW and a separate Garmin for workouts and outdoor activities
Score: 11 Votes (Like | Disagree)
Read All Comments

Monday July 25, 2022 8:30 am PDT by Hartley Charlton
The larger Apple Watch Series 8 model expected to arrive later this year is rumored to feature a titanium casing, raising questions about the future of the Apple Watch Edition. Yesterday, Bloomberg's Mark Gurman reported that the new, larger Apple Watch model scheduled to launch this year will feature a casing made of "a more durable formulation of titanium to make it extra rugged." Apple ...
Read Full Article • 166 comments

Saturday August 27, 2022 9:33 am PDT by Joe Rossignol
The so-called "Apple Watch Pro" will feature a larger 47mm case size, according to a report today from Japanese website Mac Otakara. By comparison, the Apple Watch Series 7 is available in 41mm and 45mm case sizes. A larger 47mm case size would result in the Apple Watch Pro having a larger display, which could measure in at 1.99 inches diagonally. The report, citing information received...
Read Full Article • 370 comments