The Wall Street Journal's Joanna Stern today shared a new documentary about the evolution of the iPhone ahead of the 15th anniversary of the device launching on June 29, 2007. The documentary includes an interview with Apple's marketing chief Greg Joswiak, iPhone co-creator Tony Fadell, and a family of iPhone users. 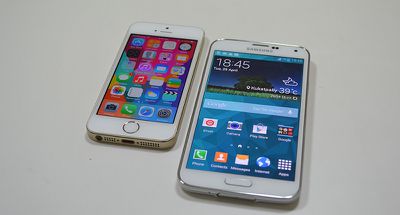 One segment of the interview reflects on Android smartphones gaining larger displays years before the iPhone did. When asked about how much of a factor Samsung and other Android smartphone makers had on Apple at the time, Joswiak admitted they were "annoying" and accused them of poorly copying Apple's technology.

"They were annoying," said Joswiak. "And they were annoying because, as you know, they ripped off our technology. They took the innovations that we had created and created a poor copy of it, and just put a bigger screen around it. So, yeah, we were none too pleased."


Samsung launched the Galaxy S4 with a 5-inch display in early 2013, at a time when the iPhone 5 had a 4-inch display. Apple did eventually release its first larger smartphones with the 4.7-inch iPhone 6 and 5.5-inch iPhone 6 Plus in 2014, and the devices were met with strong demand and went on to be among the best-selling iPhone models ever.

Apple sued Samsung in 2011 for patent infringement, alleging that Samsung copied the iPhone's design with its own Galaxy line of smartphones. Apple was initially awarded around $1 billion in damages, but the amount was lowered in a subsequent retrial. In 2018, Apple finally settled with Samsung and reiterated the following statement:

We believe deeply in the value of design, and our teams work tirelessly to create innovative products that delight our customers. This case has always been about more than money. Apple ignited the smartphone revolution with iPhone and it is a fact that Samsung blatantly copied our design. It is important that we continue to protect the hard work and innovation of so many people at Apple.

We're grateful to the jury for their service and pleased they agree that Samsung should pay for copying our products.

The full documentary can be watched on The Wall Street Journal's website and provides an interesting look back at the iPhone over the years.

dannyyankou
Apple and Samsung both made each other better
Score: 42 Votes (Like | Disagree)

blairh
And good thing they did because Apple was slow to put a proper sized screen on the iPhone.
Score: 27 Votes (Like | Disagree)

iDento
As a customer, I am happy they did, competition is good for me.

*for those whore disliking my comment, please tell me how competition is bad for you unless you’re an Apple shareholder. And by the way, almost every gadget, machine, and accessory I use is made by or related to Apple but the PS5.
Score: 24 Votes (Like | Disagree)

locovaca
How annoyed will they be when Samsung’s next release of premium laptops feature half the IO speed in the base storage configuration? Truly innovated!
Score: 18 Votes (Like | Disagree)

Andres Cantu
Copied yes, but Apple crippled their first large screen iPhone by using the same amount of RAM (1GB) for what was the third year in a row, since they knew they would still sell incredibly well.

The 6s then turned out to be a much better phone. I don’t recall Samsung crippling their devices in that manner. Plus, thanks to them, we have larger screens.
Score: 14 Votes (Like | Disagree)
Read All Comments

Monday July 25, 2022 3:40 am PDT by Sami Fathi
A chip expert who worked for Apple for nine years has left the company to join rival Samsung, Business Korea reports. Kim Woo-Pyeong, according to the report, worked for Apple since 2014 after working for Texas Instruments and Qualcomm in prior years. The report is vague on what Kim's responsibilities were at Apple, only saying he was a semiconductor expert. Apple uses a wide range of...
Read Full Article • 74 comments

Wednesday August 3, 2022 3:20 am PDT by Tim Hardwick
Apple's forthcoming iPhone 14 base model will start at $799, the same entry price as last year's 6.1-inch iPhone 13, according to a new rumor coming out of East Asia. According to a post from the account "yeux1122" on the Korean blog Naver, Apple will not increase the price of its upcoming entry-level flagship device in order to boost sales and offset declining demand amid the global...
Read Full Article • 170 comments

Monday July 11, 2022 4:17 am PDT by Tim Hardwick
Apple has asked Samsung Display to develop micro OLED panels in an effort to diversify its supply ahead of next year's launch of its widely rumored AR/VR glasses, claims a new report. According to The Elec, Samsung Display has received requests from several of its customers to start developing the microdisplays, including Apple, Meta, and its parent company, Samsung. Samsung Display is...
Read Full Article • 20 comments