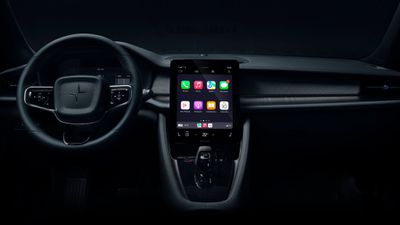 The addition of CarPlay in the Polestar 2 is interesting given that the vehicle's infotainment system is powered by Android Automotive, which is a full-stack operating system running directly on the in-vehicle hardware. Android Automotive is not to be confused with Google's similarly-named CarPlay competitor Android Auto.

In a tweet, Polestar said the over-the-air software update is rolling out to customers incrementally, and noted that the update is also available for installation at Polestar workshops. It's unclear when the rollout will be completed.

CarPlay is available in over 600 vehicle models from dozens of automakers, according to Apple, but some of the most popular electric vehicle brands like Tesla, Rivian, and Lucid Motors have yet to support the feature in their vehicles.

The most fun part about driving a Polestar is driving it, but there's more to it. Our latest over-the-air update for the Polestar 2 comes with Apple CarPlay, allowing Polestar owners with an iPhone to change music, use apps, and communicate through Siri or the infotainment system pic.twitter.com/mulkjIUR6D — Polestar (@PolestarCars) June 22, 2022

At WWDC 2022 earlier this month, Apple previewed the "next generation" of CarPlay, which includes support for multiple displays in a vehicle and direct integration with a vehicle's speedometer, fuel gauge, climate controls for A/C and heat, and more.

scheinderrob
if only tesla would follow suit with their barebones, buggy ui that breaks something with every update.
Score: 17 Votes (Like | Disagree)

Analog Kid
When Polestar was on the horizon, I thought it might be interesting to consider. I’m not a huge Tesla fan and wouldn’t mind seeing a viable competitor in the space.

When I found out it was not just running Android Auto, but the whole software stack was Google, I lost interest. I don’t need Google in my car.
Score: 10 Votes (Like | Disagree)

The Lucid Air is out now. I was surprised to run across one in a parking lot last week. Good looking car.

mark-in-mk
I own a Polestar 2 in the UK. I chose it over a Tesla because the build quality is miles higher and the interior is much more traditional than the screen first based approach. Im happy nearer the leading edge than the bleeding edge.
I've had it about 4 months, have had zero problems, and the range always exceeds what they claim - very unusual.
As for charging - It can easily fast charge on high voltage chargers, and get from 15% to 90% in about 25 mins. that gives me over 200 miles, without thinking of driving economically, or turning anything like the AC off.
At home I use my 7.5KW charger and go from 20% to 90% on a 6 hour charge during cheap rates at night.
I dont work for Polestar, but I would recommend one if you are in the market.
That said - I'll give it a few days to let other owners install the Car Play update and see how it goes for them before I dive in.

mikey918
The size of those bezels makes me think they just slapped an HP Touchpad on the dash and called it a day.
Score: 8 Votes (Like | Disagree)

I'm guessing, grasping at straws.
Volvo already blew through their federal tax credits, tax refund credit for EV was limited to certain production #'s.
New company Polestar, resets that to zero. So customers can get tax credit and it makes their cars less expensive and more competitive.
Wild speculation on my part.

I don’t think the U.S. tax credits has anything to do with it.
Here’s a few other reasons:
1. Branding. Volvo is known for security and well, rather boring cars. Polestar isn’t an entirely new brand from Volvo, but has been used in the past for their more sporty and fun initiatives.
2. Sales model. Unlike Volvos, Polestars aren’t sold through dealerships. Instead, just like Tesla, they are sold directly to customers without any middle hands.

So the whole idea is to create a bit more freedom without any of the Volvo baggage. While still being able to use all the tech and experience of Volvo.
Score: 6 Votes (Like | Disagree)
Read All Comments