Apple plans to launch its annual Back to School promotion in the United States on Friday, coinciding with the launch of the new 13-inch MacBook Pro with the M2 chip, according to Bloomberg's Mark Gurman. In a tweet, Gurman said Apple may offer a gift card with the purchase of an eligible Mac or iPad, rather than free AirPods like last year. 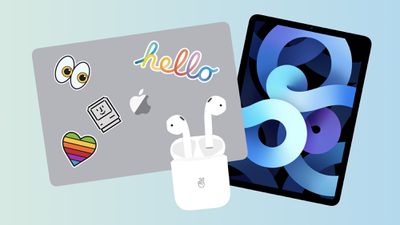 UPDATE: Apple has launched its 2022 Back to School promotion, offering students up to a $150 gift card with the purchase of an eligible Mac or iPad.

Each year, Apple's Back to School promotion offers college/university students and educators a free gift with the purchase of an eligible new Mac or iPad. Last year, the U.S. promotion began on June 17 and offered free second-generation AirPods with the purchase of an eligible Mac or iPad model, in addition to 20% off AppleCare+ plans for devices.

The promotion will likely launch in Canada at the same time as in the U.S., followed by European and Asian countries a few weeks later.

Tag: Back to School Promotion
[ 80 comments ]

matttarantino
You know you're old when you used to get a printer haha
Score: 29 Votes (Like | Disagree)

This would be an improvement as long as the gift card value is similar to the cost of AirPods. Could use it for anything for those of us who don't need another pair of AirPods.

In the past is any indication, the gift card won't have the same value as AirPods. It will most likely be $100 for Mac and $50 for iPad.

Still, I prefer the gift card over AirPods.
Score: 13 Votes (Like | Disagree)

LarrySW
This would be an improvement as long as the gift card value is similar to the cost of AirPods. Could use it for anything for those of us who don't need another pair of AirPods.
Score: 12 Votes (Like | Disagree)

madoka
At this rate, in a few years you'll just get an Apple polishing cloth with purchase.
Score: 11 Votes (Like | Disagree)

Thursday July 15, 2021 3:25 pm PDT by Juli Clover
Apple today launched the third part of its annual Back to School promotion, with back to school deals now available in most countries in Europe, some countries in Asia, and the Middle East. Higher education students and educators can get a set of free AirPods with the purchase of select Macs and iPads, which is the same deal that went live in the United States and Canada in June and...
Read Full Article • 35 comments

Apple Offering Free AirPods With Purchase for Annual 'Back to University' Promo in Australia, New Zealand, South Korea and Brazil

Saturday June 25, 2022 6:00 am PDT by MacRumors Staff
Apple this week rolled out its second developer betas of iOS 16, macOS Ventura, and related operating system updates, delivering some initial tweaks compared to the first beta. We should see the first public betas in another couple of weeks around the same time as the third developer betas, offering much wider access to the updates. This week also saw the launch of the new 13-inch MacBook...
Read Full Article • 22 comments

Tuesday June 28, 2022 3:38 am PDT by Tim Hardwick
A sketchy rumor suggesting Apple will release an iPad mini with 120Hz ProMotion was revived today in the Asian media, but a well-connected display industry analyst has already reacted to the reports with skepticism. Responding on Twitter to a question from The Mac Observer's Jeff Butts about the rumor, Display Supply Chain Consultants (DSCC) analyst Ross Young said he would be "surprised"...
Read Full Article • 50 comments