Starting with iOS 16, iPadOS 16, macOS Ventura, and tvOS 16, apps using Apple's video player are able to offer a native playback speed menu. The feature is optional for developers, however, so the functionality may not be available in some apps. 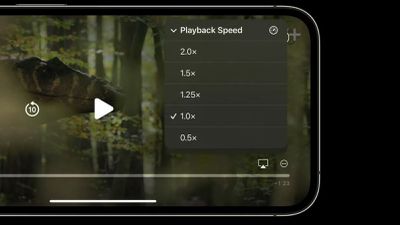 For developers, Apple says all apps using the new iOS, iPadOS, macOS, and tvOS SDKs will get this playback speed functionality automatically with no additional changes required. Developers wishing to disable the menu entirely can make use of new APIs added to AVPlayer, with more details available in this WWDC 2022 session video.

JosephAW
It would be nice to offer a rotation button even if your device is on locked rotation. :rolleyes:
Score: 11 Votes (Like | Disagree)

Antes
Awesome I watch just about everything at 1.25x.
Score: 8 Votes (Like | Disagree)

It would be nice to offer a rotation button even if your device is on locked rotation. :rolleyes:

This! And let’s also add double tap the left or right side of the screen to jump 15s back or ahead.
Score: 6 Votes (Like | Disagree)

TheDailyApple
I always speed-up any videos that aren’t for entertainment purposes. People just speak too slowly. :D Which is why I typically prefer articles and written text.
Score: 4 Votes (Like | Disagree)

ButteryScrollin
Nice. I hope Netflix gets it on tvOS.
Score: 3 Votes (Like | Disagree)

Is there a native way to change video quality on the new video player when watching on YouTube Safari?

There is an extension for that. It’s called Vinegar.
Score: 2 Votes (Like | Disagree)
Read All Comments

Sunday February 5, 2023 6:07 am PST by Joe Rossignol
Apple has discussed selling a new top-of-the-line iPhone alongside the Pro and Pro Max models in 2024 at the earliest, according to Bloomberg's Mark Gurman. Based on this timeframe, the device would be part of the iPhone 16 lineup or later. In a September 2022 edition of his weekly "Power On" newsletter, Gurman said there was "potential" for an iPhone 15 Ultra to replace the iPhone 15 Pro...
Read Full Article • 481 comments