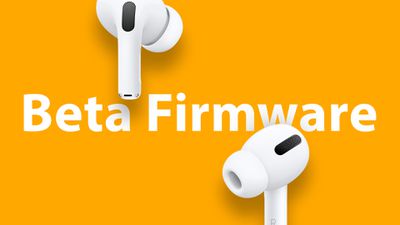 Apple says AirPods beta firmware enables development of AirPods-related features on iOS and macOS and allows Apple to debug issues. Apple did not provide any additional details about specific improvements being made to Automatic Switching in the latest beta.

Apple Developer Program members can access the beta firmware on the More Downloads page of Apple's developer website, complete with installation instructions. The beta firmware does not appear to be available for the first-generation AirPods.

To install the beta firmware, Apple says developers need an iPhone running the iOS 16 beta, a Mac running the macOS Ventura beta, Xcode 14 beta, and supported AirPods. Developers must pair the AirPods with an iPhone, connect the iPhone to a Mac with a Lightning cable, launch Xcode 14 beta on the Mac, navigate to Settings → Developer, and choose Pre-Release Beta Firmware under the AirPods Testing section.

turbineseaplane
I really wish there was a way to simply force update all the AirPods products
Score: 25 Votes (Like | Disagree)

To install the beta firmware, Apple says developers need an iPhone running the iOS 16 beta, a Mac running the macOS Ventura beta, Xcode 14 beta, and supported AirPods. Developers must pair the AirPods with an iPhone, connect the iPhone to a Mac with a Lightning cable, launch Xcode 14 beta on the Mac, navigate to Settings → Developer, and choose Pre-Release Beta Firmware under the AirPods Testing section.

It's really simple. You just need three devices and additional software to update the firmware.
Score: 22 Votes (Like | Disagree)

tgwaste
The auto switching is by far and wide the worst thing about this product. Really hope they make it better.
Score: 17 Votes (Like | Disagree)

jav6454
What a complicated process to get Beta software on AirPods.
Score: 10 Votes (Like | Disagree)

mxrider88
Improving automatic switching?
Are they kidding? It NEVER worked between my devices.
But when my partner picks up her iPhone my AirPods max transfer to her phone instead. Pure awesomeness
Score: 8 Votes (Like | Disagree)

Improving automatic switching?
Are they kidding? It NEVER worked between my devices.
But when my partner picks up her iPhone my AirPods max transfer to her phone instead. Pure awesomeness

Sounds like you need to forget the device on her phone.
Score: 8 Votes (Like | Disagree)
Read All Comments

Tuesday November 16, 2021 11:34 am PST by Juli Clover
Apple today released a new 4A402 firmware update for the AirPods Pro, which is up from the prior 4A400 firmware that was released back in October. Apple has also updated the AirPods 3 firmware to 4B66, up from the 4B61 that was previously available. Apple does not offer information on what's included in refreshed firmware updates for the AirPods‌, so we don't know what improvements or bug ...
Read Full Article • 177 comments

Friday December 10, 2021 6:33 pm PST by Joe Rossignol
Starting early next week, Apple Stores and Apple Authorized Service Providers will gain access to a new AirPods Firmware Updater diagnostic tool for updating AirPods Pro to the latest firmware, according to an internal memo obtained by MacRumors. The tool will allow technicians with access to Apple Service Toolkit 2 to download the latest firmware on a customer's AirPods Pro during repair...
Read Full Article • 53 comments