Last year's iPhone 13 Pro models were the first of Apple's smartphones to come with 120Hz ProMotion displays, and while the two iPhone 14 Pro models will continue to feature the technology, their screens could well boast expanded refresh rate variability this time round. 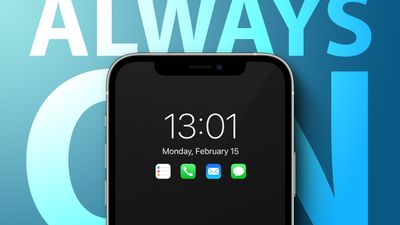 To bring ProMotion displays to the ‌iPhone 13 Pro models‌, Apple adopted LTPO panel technology with variable refresh rates, allowing for a more power-efficient backplane – the part responsible for turning individual pixels on and off. In this way, ProMotion is capable of dynamically producing fast frame rates when users need them, while preserving battery life when they don't.

On the iPhone 13 Pro and Pro Max, however, Apple's ProMotion displays are limited to dialing screen refresh rates between 10Hz and 120Hz. This contrasts with LPTO panels used by the likes of Oppo and Samsung that can drop to as low as 1Hz when viewing a static image or when the device is inactive.

Well-connected display analyst Ross Young says he is "expecting" the ProMotion displays used in the iPhone 14 Pro and iPhone 14 Pro Max to be capable of dropping to the same 1Hz low. Depending on how Apple decides to take things, the technology could pave the way for longer battery life or always-on display elements.

As an example, Apple Watch Series 7 models use LTPO displays, which enables them to have the same up-to-18-hour battery life as earlier Apple Watch models despite having an always-on display. Similar to LTPO-equipped Android phones, the same technology on iPhone could display the time, date, and any notifications on-screen at all times without needing to unlock the handset.

Last year, Bloomberg journalist Mark Gurman suggested Apple could bring similar functionality to the iPhone 13, but that didn't happen. Currently, there are no credible leaks pointing to the iPhone 14 Pro models coming with always-on display features. However, that doesn’t mean Apple won't surprise us. Indeed, if Apple expands the refresh rate variability of its ProMotion displays, there will be no technical limitations to prevent it.

No thanks. I don’t want mine on all the time. Same with the watch.

I love when people act as if they're being forced to use this feature... you can literally turn it off
Score: 31 Votes (Like | Disagree)

dantracht
No thanks. I don’t want mine on all the time. Same with the watch.
Score: 17 Votes (Like | Disagree)

tothemoonsands
Existential question: If an iphone's display is on, and there’s no one around to see it, does it display an image?
Score: 12 Votes (Like | Disagree)

TheYayAreaLiving ?
I love Always on Display on my Apple watch. It would be very nice to see it on an iPhone 14 line up.
Score: 11 Votes (Like | Disagree)

No thanks. I don’t want mine on all the time. Same with the watch.

Me either! Not sure how this is a thing? Motion activated is good enough for me.
Score: 8 Votes (Like | Disagree)

Whereas I’d be happy if they just included the option to LOCK the refresh rate, as I’m one of the unlucky few made sick by the variable refresh rate of the 13 Pro. It’s just a software toggle, folks. Bury it in accessibility for the few of us who want the improved cameras of the Pro but not the resulting vertigo from looking at the screen.